Patient Outcomes Are Looking Up 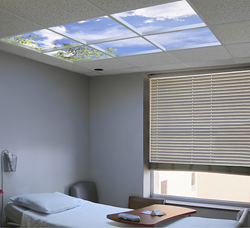 We are the first to study and quantify a simulated view to nature designed to be perceived—not as an artifact—but as an architectural feature of the room.

The October issue of the Health Environments Research & Design Journal features a new study by Texas Tech University in collaboration with Covenant Health and the Sky Factory that examined the positive impact of Luminous SkyCeilings on acute stress and anxiety in a controlled clinical setting.

The paper, The Impact of Simulated Nature on Patient Outcomes: A Study of Photographic Sky Compositions, examined the behavioral and clinical impact of Sky Factory’s biophilic illusions in a medical-surgical inpatient unit at Covenant Health Hospital in Lubbock, Texas.

The eight-month long study analyzed data from 181 subjects who were assigned to identical rooms where the only environmental variable separating the control and the experimental units was a 24 sq. ft. Luminous SkyCeiling directly above the bed.

“Only a handful of studies since Ulrich’s original window study over 30 years ago have set out to measure and quantify the difference a simulated nature intervention can make in a patient room environment,” says Dr. Pati, lead researcher and one of the co-authors of the study.

“We are the first to study and quantify a simulated view to nature designed to be perceived—not as an artifact—but as an architectural feature of the room,” says Dr. Pati.

“The Open Sky Compositions used in this study are the same photographic images used in the fMRI study that uncovered the neural correlates of nature stimuli,” adds Dr. Pati. Described by the research team as a pioneering effort in neuro-architecture, Texas Tech’s fMRI study earned the Design & Health International Academy Award for Best International Research Project (2014).

“Whereas the first study found that the Open Sky Compositions, relative to other positive images—including nature images, uniquely engaged areas of the brain involved in spatial cognition, in this study we sought to quantify the benefits in the patient environment,” added Dr. Pati.

The Open Sky Compositions used in the design of Luminous SkyCeilings are part of an artistic framework called Open Skies Image Technology. This three-dimensional approach marries visual content with architectural context—along with +20 design parameters—creating a genuine illusion of nature. Chief among these attributes is the perceived Open Sky Zenith. This visual point of reference reframes the observer’s cognitive map of the interior, giving rise to an organic experience of vastness and palpable openness.

“It was quite an ambitious study,” says Patricia Freier, MSN, RN-BC, RCIS, Project Specialist QI at Covenant Health. “It involved the help of a lot of different nurses on that floor—dismissal nurses, charge nurses, getting all the consent forms—but the comments from patients I think were most significant.

“I had one patient on a particularly difficult stay who said she felt the SkyCeiling made her feel closer to God,” adds Freier. “The results were definitely noticed by our hospital staff and leadership. Our two newest renovation projects have incorporated the SkyCeilings in the new design. These floors were completely gutted and the new design has SkyCeilings in every room.”

Sky Factory’s Luminous SkyCeilings are the only virtual skylights that have been the subject of multiple peer-reviewed published studies, as well as the recipient of international architectural awards for their design.

“The purpose of our installations is to enrich and sustain life, and to succeed, we design our Open Sky Compositions to convey the intangible healing beauty of nature’s vastness,” says Skye Witherspoon, CEO of the Sky Factory.

“At the same time, we pursue the highest standards in research to quantify the positive clinical benefits of our illusions of nature on patients, visitors, staff—anyone occupying enclosed interiors without access to restorative views of nature, which are so often absent in the built environment,” adds Witherspoon.

Luminous SkyCeilings are the only research-verified virtual skylights with peer-reviewed published studies.