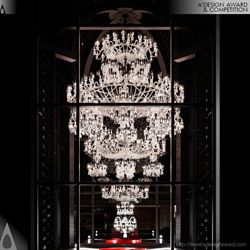 Details of Baccarat 250th anniversary chandelier
Yasumichi Morita, the designer of the award winning Lighting project Baccarat 250th anniversary chandelier demonstrated “Baccarat has been collaborating with various creators who lead generations and always seeking new creatives to produce innovative artworks. They unveiled their very first chandelier in 1827 in France and in 2014 they tried to produce the new chandelier to celebrate their 250th anniversary. GLAMOROUS co.,ltd. is so honored as to design the chandelier and has expanded the design possibility of Baccarat chandeliers under the concept of “Session of Sparkle” reflecting the combination of different materials; crystals and mirrors. ” Learn more and download high-resolution photos at: https://competition.adesignaward.com/design.php?ID=38515

The Platinum A' Design Award
The Platinum A' Design Award is a prestigious award given to top 1% percentile designs that has achieved an exemplary level of excellence in design. Entries to the A' Lighting Design Competition is judged by an expert jury panel composed of press members, academics and professional designers who peer review and anonymously evaluate the submissions based on strict guidelines and predetermined criteria. Laureates of the A' Design Award & Competition are given the A' Design Prize which includes a series of PR and publicity tools such as interview with designers to help promote the winners.