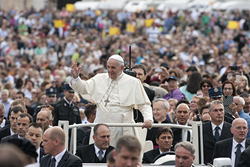 Mr. Politi will be interviewed by Julie Byrne, who holds the Monsignor Thomas J. Hartman Endowed Chair in Catholic Studies and serves as associate professor in the Department of Religion at Hofstra University.

"In Pope Francis Among the Wolves: The Inside Story of a Revolution," Italian journalist Politi balances the perspectives of Pope Francis’s supporters, previous Pope Benedict XVI’s sympathizers, and the disappointed Catholic laity, who feel alienated by the institution’s secrecy, financial corruption, and refusal to modernize.

With the Pope and his supporters embroiled in a great battle with the defenders of Catholic tradition, and with ecclesiastical corruption in Rome and Italy, the future of Catholicism is at stake. Will Pope Francis succeed in overcoming his opponents and save the faith from decline?

Marco Politi has been a leading expert on Vatican issues for more than 40 years. He is a journalist with the newspaper "il Fatto Quotidiano" and was the Vatican correspondent for "La Repubblica." With Carl Bernstein, he wrote the international best-seller "His Holiness."

For those who can't attend in person, watch this event live at http://www.carnegiecouncil.org/live

Founded by Andrew Carnegie in 1914 and based in New York City, Carnegie Council for Ethics in International Affairs is an educational, nonprofit, nonpartisan organization that produces lectures, publications, and multimedia materials on the ethical challenges of living in a globalized world. Go to http://www.carnegiecouncil.org