New game changing technology, easy to install "smart device" will double the hot water output of any water heater. For home owners this means no more cold showers and endless hot water for the family. 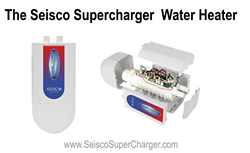 Basically, we are converting a 'dumb' water heater into an intelligent hybrid and eco friendly system and doubling its output of hot water.

It took one great idea and three former NASA Senior Engineers to make it happen. The idea was to add a “smart” device to the output of any water heater, gas or electric, to make it an endless source of hot water.

“Basically, we are converting a ‘dumb’ tank into an intelligent hybrid and eco friendly system,” says David Seitz, Founder & CEO of Seisco International LLC the manufacturer of the Seisco Supercharger. “It was my idea, but it took some very talented ‘scientists’ to make it happen. The cold shower is now a thing of the past.” The Seisco Supercharger goes onto the output of the existing storage water heater and kicks-in when it senses a drop in water temperature, said Seitz.

The Seisco Supercharger will retail for $425.00 nationwide, but is available now on Kickstarter as a reward for a pre-launch heavily discounted price of $285.00. “Our goal is to get a number of units out there right away, prior to our major launch at the 2016 International Builders’ Show and Consumer Electronics Show. It’s a great reward for our Kickstarter supporters,” added Seitz.

According to the U.S. D.O.E. there are nearly 8 million water heaters replaced each year in the United States and the vast majority of home owners are in for sticker shock as the new U.S. Department of Energy has instituted new “NAECA” restrictions for standard storage water heaters to 55 gallons. The net result is any water heater over 55 gallons is not available unless you use a much more expensive hybrid version.

“The choice for millions of home owners will be to pay much more for their new hybrid water heater or buy a smaller water heater with less capacity. Even if a home owner decides to buy the more expensive storage tank, the reality is that it’s much larger and may not even fit in the existing space. It’s a real mess out there, but now they have another option and that is to buy a 50 gallon, less expensive water heater and add the Seisco Supercharger to double the hot water output, it costs less and easily fits into their existing space,” said Seitz.

About Seisco International, LLC. The Houston based company was founded by David Seitz, the current CEO, and it was Seisco that introduced the first whole-house tankless electric water heater in 1986 in conjunction with DuPont. Seisco products are patented and are “buy American” 100% compliant. Every SEISCO tankless model is certified and tested to UL 499 Appliance Standard and the more stringent UL 834 Space Heating Standard.