It’s Not You, It’s Me - PsychTests’ Study Explores Management’s Role In Turnover

New study by PsychTests.com suggests that in order to reduce turnover, managers may need to look in the mirror, and take a hard look at their management style. 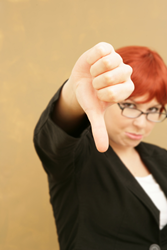 Inept management may be chasing your employees away.

There are many factors that play a role in turnover, and the way in which a company is managed has a significant impact on an employee’s decision to stay or go.

Most companies strive to hire or promote someone with the right skills to do the job, but many fail to take the manager’s personality, attitude, values, and emotional intelligence into consideration. What they end up with is a highly technically skilled manager with poor people skills, big ego, “My way or the highway” attitude and blind spots the size of Grand Canyon. When researchers at PsychTests conducted a study on people who are actively looking for a new position, they found that difficulties with management played a major role in major role in the decision to quit.

Analyzing data from 265 people who took PsychTests’ Turnover Probability Test, researchers focused on people who intend to leave their position in the immediate future and are proactively job searching. When asked what role management played in their decision to leave, the PsychTests study revealed interesting results:

“These are eye-opening statistics, and they carry a clear message: Turnover isn’t limited to a desire for more money. There are many factors that play a role in turnover, and the way in which a company is managed has a significant impact on an employee’s decision to stay or go,” explains Dr. Jerabek, president of PsychTests.

“We understand that giving employees everything they want simply isn’t feasible. For example, a company may not have the funds to pay an employee a salary that aligns with industry standards, or to offer bonuses on a regular basis. However, a good manager will recognize that there are other ways to show appreciation, like praise, gift cards, extra vacation time, flextime, benefits, etc. Unfortunately, our study reveals that only 22% of managers actually do this. The bottom line: If a company wishes to reduce turnover, a first step would be to conduct a ‘management audit’."

"Have managers take a 360 assessment with employees rating their manager’s performance. There’s a good chance it will bring issues to light that the company may not have been aware of. Secondly, if you’re hiring a new manager, whether it’s from within the company or not, consider the benefits of an emotional intelligence assessment and training program. A competent manager is someone who has the skills to complete the tasks relevant to a job. A great manager is someone who completes tasks well and who can lead a team to success.”

Want to assess your turnover potential? Go to http://testyourself.psychtests.com/testid/3607

Professional users of this assessment (HR managers, recruiters) can request a free demo of the Turnover Probability Test or any other assessments from ARCH Profile’s extensive battery: http://hrtests.archprofile.com/testdrive_gen_1

If a company wishes to reduce turnover, a first step would be to conduct a management audit.24% of soon-to-be quitters admit that they don’t have a good relationship with their manager.