Kane Russell Coleman & Logan successfully prosecuted an appeal to the Fifth District Court of Appeals in Dallas and won reversal of individual liability. 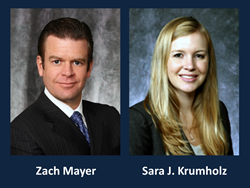 Through this appeal, we were able to clarify a rule of law that was once clear, but had been muddied by case law over the last twenty years.

Premier Place filed summary judgment and the disputed issue was whether the debts were created or incurred when Bon Amour was in good standing and whether Plaintiff had proven there were no fact issues as to its claimed damages. The trial court granted Premier Place’s summary judgment and awarded damages in the amount of $448,754.43 against both Bon Amour and Nathan Halsey, individually.

The Defendants appealed the case, arguing an issue of fact existed in regards to the amount of Premier Place’s damages and that Halsey was not personally liable. The appeal was presented to Justices Bridges, Lang and Schenck, who reversed the trial court’s judgment holding Halsey personally liable, as an officer of Bon Amour, and rendered that Premier Place take nothing on its claims against Halsey individually. The Court further sustained Bon Amour's argument that fact issues remained as to the amount of damages that can be awarded and remanded the case for further proceedings as to those damages.

“I am very pleased that the Court ruled in our client’s favor. Through this appeal, we were able to clarify a rule of law that was once clear, but had been muddied by case law over the last twenty years,” said Zach Mayer, the Defendants’ counsel.

Kane Russell Coleman & Logan PC is a full service law firm with offices in Dallas and Houston. Formed in 1992 with five lawyers, today KRCL has more than 95 attorneys. The Firm provides professional services for clients ranging from Fortune 500 companies to medium-sized public and private companies to entrepreneurs. KRCL handles transactional, litigation and bankruptcy matters in Texas and throughout the country.