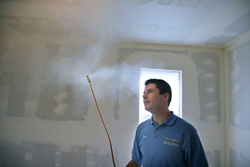 A new building envelope sealing technology designed to effectively seal the outer shell of homes and buildings was unveiled today at the first annual Aeroseal Success Summit. The new technology is the first automated system used to effectively find and seal air leaks in building structures, constituting a breakthrough in sustainable building practices.

The technology’s unveiling was just one of several key announcements made at the Aeroseal Success Summit, a three-day event attended by more than 200 Aeroseal dealers and Comfort Institute members from around the U.S. and Canada. The new envelope sealing technology was introduced by Dr. Mark Modera, professor at the University of California Davis, and director of the university’s Western Cooling Efficiency Center, where the technology was developed.

“We’ve taken a lot of the lessons we learned when developing aeroseal duct sealing technology and adapted them for practical application in sealing the entire building envelope,” said Modera. “The result is a technology that can potentially revolutionize the way we approach energy-efficient building.”

The patented technology uses a compressed nitrogen system to push sealant through multiple nozzles. Sprayed into a pressurized structure, the sealant is drawn to any cracks or leaks in the building envelope, including those around walls, doors and windows. The particles of sealant bond around the holes and then to each other until the leaks are completely sealed. According to Modera, it takes about 1 hour to seal a 1,200 square foot home.

“Currently, envelope sealing is a laborious and imprecise manual process, typically including caulking and weather stripping,” said Modera. “This new approach has the potential to seal faster, cheaper and much more effectively than any manual process. It finds the leaks for you and provides a computer-generated verification of the sealing effectiveness.”

According to Modera, the new technology could be available for commercial use later next year.

“Previously, our dealers had to carry each individual component of the Aeroseal duct sealing equipment into the home and assemble it piece-by-piece as part of the normal setup routine,” said Bryan Barnes, senior director of business development at Aeroseal. “Now, they can arrive at the job ready to attach the pre-assembled equipment in the trailer directly to the home’s ductwork. The operation can be operated and managed with a wireless tablet.

According to Aeroseal, the new Mobile PRO system can increase productivity by 30 percent or more – saving time and increasing profitability.

For more information on the new Mobile PRO system from Aeroseal or the new envelope sealing technology, call 937-428-9300 or visit http://www.aeroseal.com