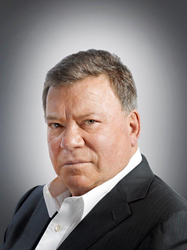 The Society of Voice Arts and Sciences™ (SOVAS™) is excited to announce that they will recognize William Shatner for his distinctive voice and his extensive body of voiceover acting work, and will present him the VOICE ARTS® ICON AWARD during the second annual VOICE ARTS® AWARDS GALA in Los Angeles, on Sunday, November 15, 2015. Leading voiceover actors and other professionals in the industry, from the U.S. and countries around the world, will be recognized and celebrated for their accomplishments and advancements made in this multifaceted industry. The VOICE ARTS® ICON AWARD is one of the ceremony’s highest honors; the 2014 recipient of the ICON AWARD was actor James Earl Jones, who was present to receive his award at the first ever VOICE ARTS® AWARDS last year in New York City. The VOICE ARTS® AWARDS is an international competition showcasing the best work in professional voiceover acting, creative direction and casting for advertising, audiobook narration, movie trailers, video gaming, animation, television and radio.

“We are thrilled that William Shatner will attend the VOICE ARTS® AWARDS ceremony to receive this distinguished honor, which is more than well deserved,” says SOVAS™ CEO Rudy Gaskins. “His legendary presence will add to the elation that will be felt by attendees—some of the world’s best voice artists—who are overjoyed that these awards now exist to formally acknowledge and applaud top tier voiceover work”.

“In voiceover work, the fewer the words, the better the message. I am honored by this award,” said Shatner.

The event is sponsored by Sennheiser, Backstage Magazine and CBS2.

For more information on the VOICE ARTS® AWARDS, visit: VoiceArts.org.