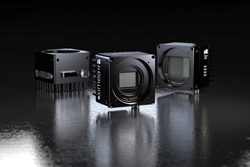 The PCIe® interface inside eliminates any need for a framegrabber. Image data are seamlessly delivered and stored right inside the PC memory and are immediately available for processing and encoding by CPU and GPU.

XIMEA announced the availability of a new model called CB120 at Intel’s IDF 2015 in San Francisco – a 4K camera using a PCI Express® (PCIe®) interface and delivering 12 Megapixel of crystal clear images at 130 frames per second over distances up to 300 meters with the help of a fiber-optic cable: http://www.ximea.com/en/products-news/pci-express-camera-cmv12000

The newly available model’s data and control interface is fully compliant with PCI Express External Cabling Specification and provides bandwidth of 20 Gb/s, which with real data throughput of 1550 MB/s is exceptional even within the realm of other high speed interfaces.

The PCIe® interface that is implemented inside the camera eliminates any need for a framegrabber. Image data are seamlessly delivered and stored right inside the PC memory and are immediately available for processing and encoding by CPU and GPU removing any possible latency.

For users who intend to synchronize multiple cameras: the models include opto-isolated inputs and outputs exposed from compact and robust camera body with industrial connector. To slim down the footprint both connectors are placed on the bottom resulting in size of mere 60 x 60 x 38 mm and weigh 175 grams. Additionally, as usual for XIMEA cameras the power consumption is conveniently low at 6 Watt.

Raising the comfort of use new models are outfitted with an integrated lens interface that is compatible with Canon EF-mount lens and allows remote control of aperture, focus and image stabilization.

About XIMEA
Drawing on two decades of experience in the industry, XIMEA offer consists of state-of-the-art cameras with USB 3.0, USB 2.0, PCI Express and FireWire interface as well as X-RAY, Hyperspectral and Thunderbolt™ technology enabled cameras.

For more than 20 years XIMEA has developed, manufactured and sold standard or OEM cameras for machine vision applications in motion control, assembly, robotics, industrial inspection and security, as well as scientific grade cameras for life science and microscopy.

The main distinction is based on extremely robust way the cameras are built while still providing highest speed like for example the USB3 Vision camera line. Learn more about XIMEA at http://www.ximea.com