The nation's top student weed scientists proved they were up to the challenge to identify 130 species of weeds and their seeds on sight during the recent 2015 National Collegiate Weed Science Contest. Sixty-five teams from 25 schools participated in the event hosted by Ohio State University's Agricultural Research and Development Center. 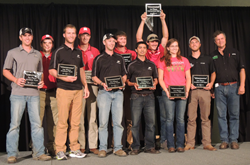 The caliber of the competitors was outstanding, and I can’t wait to see how their careers unfold

Would you be able to identify 130 species of weeds and their seeds on sight? While for most of us the answer is a resounding “no,” many of the nation’s top student weed scientists proved they were up to the challenge during the recent 2015 National Collegiate Weed Science Contest.

Sixty-five teams from 25 schools participated in the event hosted by Ohio State University’s Agricultural Research and Development Center, including 140 graduate students and 73 undergrads.

Students competed both as individuals and as teams to tackle several tough challenges. They were asked to identify weeds at various stages of growth and development – from seeds to mature plants. During live role-playing sessions, they were asked to problem-solve weed management issues faced by farmers and land managers. They had to identify which of 30 herbicides had been used to treat various field plots based on visual indicators of impact on plants. Finally, they had to prove they could calibrate the sprayers commonly used in weed control – on the spot.

“It was a great day, with lots of enthusiasm from students, their coaches and the many volunteers who were there to help,” said Bruce Ackley, Ph.D., a weed scientist at Ohio State University and a co-chair of the event. “The caliber of the competitors was outstanding, and I can’t wait to see how their careers unfold.”

In addition to bragging rights, the winners will get a free registration and lodging during the Weed Science Society of America annual meeting to be held February 8-11, 2016, in San Juan, Puerto Rico.

Graduate student winner Lancaster, who grew up on a family farm in Arkansas, said he and his teammates began training months in advance. One of the biggest challenges they knew they would face were regional variations in crops, weeds and control measures. As the event approached, they were spending three to four hours a day in intense study to make certain they were prepared.

“I would have been right at home if we walked into a field of rice, but we knew we wouldn’t see that in Ohio,” he said. “We really had to get out of our comfort zone and learn so much information that we wouldn’t have otherwise. I know it will make us better-rounded weed scientists by broadening our experience.”

During the problem-solving portion of the competition, Lancaster was asked to troubleshoot soybean yield losses attributed to giant ragweed that wasn’t being adequately controlled by herbicides. “It took me about 10 minutes to figure out that the farmer wasn’t adding an adjuvant to his sprayer before applying the treatment,” he said.

About the Weed Science Society of America

The Weed Science Society of America, a nonprofit scientific society, was founded in 1956 to encourage and promote the development of knowledge concerning weeds and their impact on the environment. The Society promotes research, education and extension outreach activities related to weeds, provides science-based information to the public and policy makers, fosters awareness of weeds and their impact on managed and natural ecosystems, and promotes cooperation among weed science organizations across the nation and around the world. For more information, visit http://www.wssa.net.

Editor’s note: A photo of the national winners can be downloaded at: http://wssa.net/wp-content/uploads/2015-award-winners.zip

During the reception National Collegiate Weed Science Competition, awards were also presented to individuals and teams from each of the four regional weed science societies who logged the highest scores.