Taiwan Minister of Interior Mr. Chin Wei-zen presented the Church of Scientology of Taiwan its 12th annual Excellent Religious Group Award on September 11, acknowledging the Church and its many volunteers for their service to society. 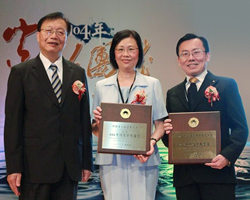 In recognition of exceptional service to the community, the Church of Scientology Taiwan was once again at center stage this year. The Taiwan Minister of Interior Mr. Chin Wei-zen presented the Church with the Ministry’s Excellent Religious Group Award, an honor the Church has received for 12 consecutive years.

Joining Ms. Sunny Fu, the chief executive of the Church, was Dr. Oliver Hseuh, Executive Director of the Church of Scientology Kaohsiung. This was the first such award for the new Kaohsiung Church, which hit the ground running in launching its humanitarian initiatives and social betterment campaigns immediately upon opening in December 2013.

Service is a tradition that springs from the very basics of the Scientology religion. Scientology Founder L. Ron Hubbard wrote that, “a being is only as valuable as he can serve others,” and Taiwanese Scientologists fully embrace that philosophy in their actions.

The Scientologists of Taiwan have distributed nearly a million copies of the Truth About Drugs drug education booklets and delivered lectures and seminars to more than 300,000 youth. And they freely donate their time to teach youth the UN Universal Declaration of Human Rights, to instill in the next generation the importance of human rights and the individual’s responsibility to see that these rights are upheld.

The Church of Scientology Kaohsiung also holds regular open house events in support of important social issues and reforms, and it was designed to serve as a home for the greater community and a meeting ground of cooperative effort to uplift people of all denominations.

The Scientology religion was founded by author and philosopher L. Ron Hubbard. The first Church of Scientology was formed in Los Angeles in 1954 and the religion has expanded to more than 11,000 Churches, Missions and affiliated groups, with millions of members in 167 countries. Learn more at http://www.Scientology.org