With the NFL season now fully underway, The Right Profile has updated its Athlete Types data to reflect the most current distribution across NFL positions. 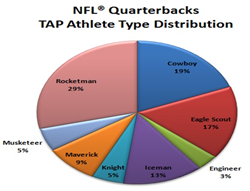 Despite the less common Athlete Type matches of Winston and Mariota, when adding the complete 2015 draft class to the overall TAP database, a whopping 29% of NFL quarterbacks match to the “Rocketman” type with characteristics such as ‘cool under pressure’

With the NFL season now fully underway, The Right Profile has updated its Athlete Types data to reflect the most current distribution across all NFL positions. As top college football prospects have done for the last 20+ years at the NFL Combine, the top two ranked quarterbacks, Jameis Winston and Marcus Mariota, filed into a small room together with the other quarterbacks to take the Troutwine Athletic Profile (TAP) to assess their mental makeup. The eventual top two picks in the draft showed they are not the prototypical quarterback, at least not from the mental perspective. Winston matched to the Maverick type (9% of NFL QB’s) and Mariota to the Knight type (5% of NFL QB’s).

Dr. Robert Troutwine, Chief Psychologist & Co-Founder of The Right Profile, proctors the TAP assessment in person and provides the results to NFL general managers and player personnel directors in the form of a personalized report on each athlete. Nearly all players invited to the NFL Combine since the 1990’s including over 90% of players active in the NFL have taken the TAP assessment. The TAP assessment measures an individual on 66 mindset indicators, 11 behavioral traits and three learning traits important for succeeding in athletics at the highest level.

A recent statistical analysis of the results of more than 20,000 elite athletes that have taken the TAP assessment over the years revealed eight distinct athlete types (more than personality), each with their own strengths, weaknesses, and particularly effective coaching techniques to help each type maximize their potential. A player’s matched type is based upon his answers to the questions on the TAP assessment. “The TAP Athlete Types are a ‘game changer’ for understanding what makes different athletes tick,” said Dr. Robert Troutwine. “Now coaches and athletes have a common framework to better understand and interact with each other.”

Despite the less common Athlete Type matches of Winston and Mariota, when adding the complete 2015 draft class to the overall TAP database, a whopping 29% of NFL quarterbacks match to the “Rocketman” type with characteristics such as ‘cool under pressure’ and ‘will push hard to accomplish goals’. It is not surprising that many top quarterbacks such as Tom Brady, Andrew Luck and Tony Romo match the Rocketman profile.

While individual TAP reports for NFL prospects are private and only for NFL personnel, descriptions of the Rocketman Athlete Type, the other seven athlete types and even representative athletes can be found at athletetypes.com.

The eight TAP Athlete Types are:

These athlete types transcend specific sports. The TAP is given to athletes in MLB and the NBA, plus numerous other sports at the college level. It is even used in high schools to develop young players. The TAP details how to coach to each type of player and includes self-development exercises in the TAP’s Mental Gym.

Any athlete can take the TAP at TakeTheTAP.com. A special report for fans is available as well. Coaches can add their team and have their players take the TAP at AthleteTypes.com.

As to the accuracy of the TAP report to profile an athlete’s traits and athletic mindset, Bill Belichick, Head Coach of the New England Patriots, said, “I will get out a TAP report on a player written 5 years ago and it reads like I am the one that wrote it.”

About The Right Profile
The Right Profile and its TAP360 System is used by teams in the NFL, MLB, NBA and numerous college athletic programs to evaluate and develop athletes. The company’s cloud-based platform of assessments, reports and exercises to improve athlete development and the mental game is based on the Troutwine Athletic Profile (TAP), which has already been taken by over 20,000 elite athletes. The goal of the TAP360 System is to help athletes develop a champion’s mindset. For more information, visit therightprofile.com.