In a recently published Troy Media op-ed, Friends of Science Society has been critical of the make-up of the Alberta Climate Change Panel, citing a lack of business and consumer representation and the existing close ties of panel members, but the release of a recent pro-carbon tax poll, by an associated body, on what was to be the final day for climate change submissions is inappropriate says Friends, especially as the deadline was extended to midnight, October 2nd. Friends of Science questions the role of activist drives from Greenpeace Canada and non-resident bodies like the Suzuki Foundation. 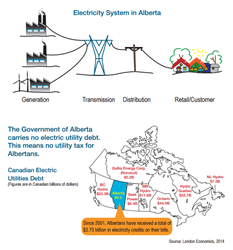 unless Albertans understood it would cost more than $11 billion dollars to phase-out coal-fired power plants, it was not reasonable to ask Albertans whether they agreed with such a move.

According to Friends of Science Society's recently published criticism of the Alberta Climate Change Panel as too one-sided, outlined in their Troy Media op-ed of Sept. 2, 2015, the group is now asking Alberta's Premier Rachel Notley to reform the Alberta Climate Panel with more representation from Alberta businesses, consumers, diverse climate scientists, manufacturing and agricultural experts.

Friends of Science Society demand is prompted by what they say is an impropriety of the Pembina Institute – that has a board member on the panel – which released a pro-carbon tax survey on what was to be the last day of open submissions, as reported in the Edmonton Journal of Sept 30, 2015. Submissions have been extended to Oct. 2, 2015 at midnight, noted on the panel website.

Likewise, in a subsequent video issued Sept. 15, 2015 [ youtu.be/W3SGgrgbaK0 ] Friends of Science Society publicly questioned the “Alberta Climate Leadership” document’s lack of factual context on the price and challenges of instituting various energy production options, with the Friends saying that unless Albertans understood it would cost more than $11 billion dollars to do an early phase-out of coal-fired power plants, it was not reasonable to ask Albertans whether they agreed with such a move. The Calgary Herald reported cost assessments Sept. 11, 2015. Canada's coal-fired power plant operators have an existing federally mandated phase-out schedule in place.

In January of 2015, Friends of Science Society released a report entitled “Burning Questions,” which revealed that the claims of the phase-out coal advocates were not supported by the evidence in Pembina Institute’s report “A Costly Diagnosis” issued in 2013. Friends of Science Society says that the fact that a board member from Pembina Institute is on the climate panel, as stated in an Alberta government press release of Aug. 14, 2015, and all of the parties have some previous connection, suggests too one-sided a perspective. A Sept. 30, 2015 commentary by Vivian Krause in the Financial Post linking Pembina Institute and Pembina Foundation to offshore funding from an anti-oil sands campaign raises more questions about the panel's impartiality, according to Friends of Science.

Friends of Science Society encourages Canadians to read their blog posting on the challenges and exorbitant costs of incorporating wind and solar, which was prepared by power generation experts and that rebuts the Greenpeace claim that Alberta or Canada could go to full renewable power.

Friends of Science also questions the on-line advocacy campaigns by the Suzuki Foundation and Greenpeace Canada, both of which encouraged their members to participate, even if not a resident in Alberta.