Drew Cooper Anding P.C. represented Marcia Meoli, Trustee of Teleservices, who pursued relief on behalf of the victims of the Ponzi Scheme 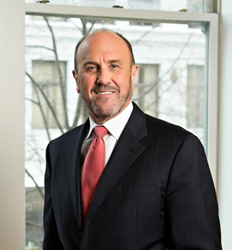 The judgment affirms the trial verdict entered by the bankruptcy court and adopts its findings that Huntington turned a “blind eye” to the six- and seven-figure “large round dollar transfers” into Cyberco’s depository accounts from Teleservices.

On Monday, September 28, 2015 a federal district court in Michigan (United State District Court Western District of Michigan Southern Division) entered a judgment (Case 1:12-cv-01113) against Huntington National Bank in the amount of $71,833,628.81, that with interest will exceed $80 million. The judgment will be shared by victims of a $100 million Ponzi scheme perpetrated by Barton Watson through an entity known as Cyberco and its affiliate, Teleservices. Marcia Meoli, Trustee of Teleservices, who pursued relief on behalf of the victims of the Ponzi Scheme, was represented by John E. Anding, of Drew, Cooper & Anding, P.C. as special trial counsel and Douglas Donnell of Mike Meyers Beckett & Jones.

The scheme involved phony sales of nonexistent computer equipment from Teleservices to Cyberco, both of which were created by Watson. “The judgment affirms the trial verdict entered by the bankruptcy court and adopts its findings that Huntington turned a “blind eye” to the six- and seven-figure “large round dollar transfers” into Cyberco’s depository accounts from Teleservices, which Huntington admitted came from an unknown and suspicious source,” said John Anding quoting the language used by the Bankruptcy Judge who authored the opinion adopted by the District Court.

The transfers taken by Huntington were the fruits of the fraud, and constituted tens of millions stolen from victims across the nation. From these stolen monies and immediately prior to the collapse of the Ponzi scheme, Huntington repaid itself a $17 million loan it had made to Cyberco. The Court’s judgment affirmed the verdict and orders Huntington to repay the entirety of over $71 million in stolen funds to victims of the Ponzi scheme.

In addition to repaying the full amount of the $71 million in stolen funds, Huntington must pay prejudgment interest. The interest will add in excess of $9 million to the judgment bringing the total judgment to over $80 million.

About Drew, Cooper & Anding (DC&A): Since its inception in 1991, the law firm of Drew Cooper & Anding has dedicated itself to providing exemplary representation to its clients throughout Michigan and across the country. Whether an individual client or a corporation, we use the same creative and dynamic approach, employing the latest in litigation technology, allowing us to compete with larger national firms. Drew Cooper & Anding prides itself on being a firm of trial lawyers with collective courtroom experience exceeding 100 years. The firm has been listed in the Bar Register of Preeminent Lawyers since 1997 and is a Martindale‐Hubbell AV rated firm based upon peer review. For more information please visit their website: http://dca-lawyers.com/ or call: (616) 454-8300.