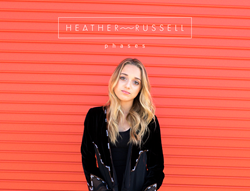 Through my music I want to show that its OK to be yourself and not be what someone else wants you to be. JUST BE YOU!

15 Year old Canadian Singer/Songwriter Heather Russell will release her debut EP "Phases" on Friday October 2nd 2015. She wrote and co-produced all 6 songs on the EP as well as playing keyboards on each track. One of the EP's standout tracks, the anti bullying anthem "This Is Who I Am" was written when she was just 9 years old.

The lead single from the EP " Got This Feeling" was released on July 24th 2015. The accompanying video for the track debuted on September 22nd 2015 and was featured on USWEEKLY.com (http://usm.ag/1Ob6ln3).

"The feeling is just so surreal knowing that I get to share music with people." says Russell. "Through my music I want to show that its OK to be yourself and not be what someone else wants you to be. JUST BE YOU!" she added.

The EP is available for $3.99 from 12am on October 2nd 2015 through Itunes/Apple Music at http://smarturl.it/hr_itunes

Heather can currently be seen on her first tour throughout the US, The High School Nation Tour with Drake Bell which promotes the need for arts in school and brings together artists with their fan bases while teaching the next generation that the arts are important. Heather has been able reach a new fanbase and perform her EP for up to 4000 high school students at each date. The tour continues through October 23rd.

About Heather Russell
Heather Russell is a 15-year-old singer songwriter from Toronto, Canada. Heather taught herself how to play piano and around age 8, she began posting videos of her performances on YouTube. It was there that she was discovered by media mogul Simon Cowell who signed her immediately to his label SYCO. The two worked together, honing Heather’s talent until parting ways a few years later. In 2014, Heather and her family moved to Los Angeles, California, and she began recording her debut self penned EP "PHASES" with some of the industry’s top producers.