Securly Captures Greater Than 1% Market Share for US Public Schools, Including 5% for California and Illinois

Cloud-based web filtering provider attributes its fast growth to ease of deployment/management, school-focused features like cyberbullying detection and reports for parents, and low total cost of ownership for schools. 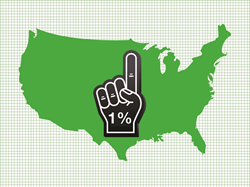 Over two years later, the decision to move to Securly proves itself time and again. It has been the easiest, most effective, and least stressful service to manage. It simply just works, and it works wonderfully.

After just over two years of operations, Securly, Inc. – the world's leading cloud-based provider of Internet Security for K-12 schools – today announced that it has captured greater than 1% market share in K-12 public schools in the United States. The US is home to over 14,000 public school districts and nearly 100,000 public schools (source: National Center for Education Statistics).

Securly’s early success can be attributed in large part to several states with an early adopter mentality that were eager and willing to replace their web filtering appliances with next-generation cloud-based web filtering built exclusively for K-12 schools. Two such states – in which Securly has gained nearly 5% market share – include California and Illinois, both considered among the largest and pioneering edtech markets with their early adoption of new technologies and rapid movement to the cloud.

Tom Walker, Director of Technology at Massac Unit School District #1 in Metropolis, IL, reflected on his decision to switch to Securly over two years ago. Walker, one of Securly's first customers, says: "Being a Google Apps for Education school district and having the need to replace our web filtering appliance, the decision to go with Securly was an easy one. In just a few minutes, I was able to switch our filtering over to Securly and within moments I knew I had made the right decision. Over two years later, the decision to move to Securly proves itself time and again. It has been the easiest, most effective, and least stressful service to manage. It simply just works, and it works wonderfully."

Andrew Schwab, Chief Technology Officer for Union School District in San Jose, CA, uses Securly to manage his 1:1 program with over 5,000 Chromebooks. Schwab's decision to move to Securly was an easy one, as the district's long-used web filtering appliance had failed and needed to be replaced. Says Schwab: "With Securly, we were actually able to cut over to it immediately because it's not appliance-based. We didn't have to do any kind of installation. We just pointed our DNS servers at Securly, flipped the switch, and we were filtered again." Schwab, who has also served as a board member for the popular edtech organization Computer Using Educators, or CUE, wrote a blog post (http://bit.ly/1GoG8tk) about how Securly’s K-12 focused reporting differentiates it from other web filters by giving schools powerful insights on how students are using technology in the classroom and at home.

Schools interested in signing up for a free trial of Securly can learn more at:

About Securly:
Securly is a leading provider of cloud-based web filtering for schools and parental controls for homes. The founding team has a combined 20+ years of experience in network security. The company is a venture-backed startup in Silicon Valley and serves thousands of schools in North America, Europe and the Asia Pacific region.