“From Timbuktu to the Mississippi Delta: How West African Standards of Aesthetics Shaped the Music of the Delta Blues" 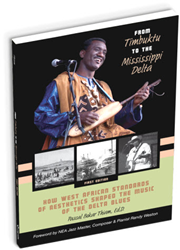 “From Timbuktu to the Mississippi Delta" book cover

This book makes the most compelling argument for the African roots of blues and jazz. …It ought to be mandatory reading for anyone remotely interested in modern music and its ancient lineage.

Brilliant San Francisco Bay Area musician, composer, bandleader and educator, Dr. Pascal Bokar Thiam, was overwhelmed by the extraordinary success that his book received upon first publication. As all information contained in the widely-received “From Timbuktu to the Mississippi Delta: How West African Standards of Aesthetics Shaped the Music of the Delta Blues" is factual, Thiam has published this revised first edition to address the continued evolution of music genres. The book is frequently used as a college level text for music arts students.

A most enlightening tome, “From Timbuktu to the Mississippi Delta" methodically explores how West African standards of aesthetics and socio-cultural traits have moved into mainstream American culture and become social norms.

In addition to its textbook aptness, the book's content makes for entertaining reading, and is appealing to the new generation of music enthusiasts and students. “From Timbuktu to the Mississippi Delta" is filled with fascinating pictures and maps to help move its readers through annals of music history—from West Africa to American mainstream—Blues and Jazz.

When speaking about his inspiration to write “From Timbuktu to the Mississippi Delta," Dr. Thiam remarked, "I was curious to know why African Americans began clapping on beats two and four; and why we’d get dirty looks if we were caught clapping on the wrong beat; and why the identity of the music of our nation, with its majority population of European descent, had the musical textures, bent pitches and blue notes of Africa and a sense of swing developed here that was closer in syncopation to African culture than to the classical music of Vienna or the Paris Opera; and finally, why our nation’s youth moved suggestively on the dance floor with their hips—movements that are closer in aesthetics to African dance than to ballet. The journey began on the banks of the mighty Niger River."

The original publication (2011) was extremely well received by many music academics and renowned jazz musicians and aficionados. Several of them sang the book's praises and underscored Dr. Thiam's music history mastery:

"The music is so varied that we still have no real idea what African music is. When a person is touched by African music, from his skin to his soul, that person has become Africanized. … Perhaps this is the true meaning of universal: something foreign that reminds you of your deepest self. Dr. Thiam has made a major contribution and this book should be in every school and home."
Randy Weston, Composer & Pianist, NEA Jazz Master

"… Dr. Pascal Bokar Thiam guides us straight to the serious questions of the origin of Jazz and Blues throughout a long journey across West Africa. This book is a must read for those who care not only about music, but are also interested in social justice, colonization and slavery."
Magueye Seck, Ph.D. - Prof. of Sociology, Curry College

"Pascal Bokar Thiam journeys us back to root sources, visiting ancient string, voice and cultural traditions of Africa that shed revealing light on the birth of the blues."
Willard Jenkins, Author of "Arranger of African Rhythms: The Autobiography of NEA Jazz Master Randy Weston"

"... makes the most compelling argument for the African roots of blues and jazz. … This book ought to be mandatory reading for anyone remotely interested in modern music and its ancient lineage."
Robin D. G. Kelley, Ph.D., Prof. of American Studies and Ethnicity, University of Southern California

ABOUT THE AUTHOR:
Dr. Pascal Bokar Thiam is on faculty at University of San Francisco (USF) in the Performing Arts Department. He teaches Jazz history and theory courses as well as African music survey classes. He is also director of the USF Jazz Band. Dr. Thiam is a Jazz guitarist/vocalist of Senegalese and French descent.

His recent CD “Guitar Balafonics," makes evidence of the connection between African culture and American Jazz, in terms of esthetics, charted in the top 20 on Jazz stations nationwide. Additionally, Thiam is the proud owner and manager of the Bay Area's award-winning Savanna Jazz Club.

Thiam began his formal studies at the National Conservatory of Region in Nice, France in 1980, then moved to Boston in 1983 to study at the renowned Berklee College of Music. After performing for many years, he returned to school, earning a Master’s Degree from Cambridge College in 1998. In 2006 he earned his Doctorate Degree in Education from the University of San Francisco and joined the faculty soon after. Dr. Thiam's areas of interest include Jazz education, social justice and diversity.