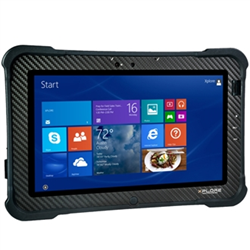 After spending a day on the job with the XLATE B10, you’ll understand why this truly mobile, fully featured tablet PC sets a new standard in ruggedness and connectivity," said Mark Holleran, Xplore Technologies President and COO.

Group Mobile, a premiere provider of the top brands in rugged laptops, rugged tablet PCs, rugged smart phones, and rugged handheld computers has recently extended its product offerings to include the new Xplore XSLATE B10 fully rugged tablet. The XSLATE B10 is one of the industry’s most featured, fully rugged tablets to date. The Xplore XSLATE B10 is powered by the latest Intel Core i5-535OU 1.8GHz processor, 8GB RAM, and a 128GB solid state drive. An Intel Core i7 processor is available as an upgrade, as well as 256GB solid state drive.

The XSLATE B10 tablet includes a Wacom pen digitizer and active pen, the xCapture Pro camera application and an optional integrated barcode scanner. The XSLATE B10 has optional accessories including a removable companion keyboard, office or vehicle docking stations, kickstand, a second hot- swappable battery to extend system runtime to 20 hours, and 2-bay or 6-bay simultaneous battery charging options.

The XSlate B10 is remarkably rugged for such a lightweight tablet. It meets MIL-STD 810G and IP65 standards for durability and protection against dirt, dust, water, motion, vibration, temperature, and other factors that would quickly damage a commercial-grade tablet. The tablet can start up in temperatures as low as -4 degrees Fahrenheit and operate in temperatures as low as -30 and as high as 140 degrees Fahrenheit (-20 to +60 degrees Celsius), enough for virtually any conceivable deployment.

"The XSLATE B10 is the hardest worker yet. After spending a day on the job with the XLATE B10, you’ll understand why this truly mobile, fully featured tablet PC sets a new standard in ruggedness and connectivity," said Mark Holleran, Xplore Technologies President and COO. “Built with unfailing protection in mind, it endures extreme work environments. At 10.1”, it’s compact, yet commanding in the field.”

To learn more about all of the Xplore rugged computers Group Mobile carries, visit http://www.groupmobile.com/brand.asp/mf_id=19/Xplore+Technologies.html

About Group Mobile
Headquartered in Phoenix, AZ, Group Mobile serves customers all over North America. Customers range from Fortune 500 companies and the U.S. Military, to local police/fire/ambulance, to small and mid-size businesses, to the frequent traveler that needs something more durable than a commercial, off-the-shelf computer. Group Mobile carries all the leading rugged computing brands. In addition, Group Mobile offers vehicle docking and mounting equipment]. To learn more about rugged computers and how they differ from commercial, indoor computers, check out the Rugged Computer Guide or visit us online at http://www.groupmobile.com.