Canyon Diamond Media yesterday launched a crowdfunding campaign for its short film “Stand Up” on Ovation TV's Creative Studio, a partnership between the network and RocketHub. “Stand Up” is a short film about a successful comic who faces the ultimate career killer – his death, and the campaign site is RocketHub.com/61353 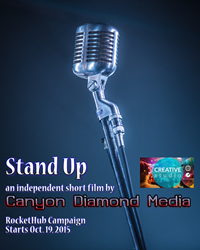 Canyon Diamond Media yesterday launched a crowdfunding campaign for its short film “Stand Up” on Ovation TV's Creative Studio, a partnership between the network and RocketHub. “Stand Up” is a short film about a successful comic who gets booed off the stage only to learn he’s facing the ultimate career killer – his death. The campaign site is RocketHub.com/61353

CDM President Karen Withem said her goal is to raise $10,000 through the Creative Studio campaign and other donations to make “Stand Up.” She plans to direct the film, based on her script, in March and complete it next summer. The film’s web site is Canyondiamondmedia.com/standup

Ovation TV’s acceptance of “Stand Up” into Creative Studio comes at a time when big budget film and television production in North Carolina has dropped sharply due to the sunsetting of state tax incentives for studios. Independently financed projects continue to be made even as the battle over whether “to incent or not to incent” is being waged.

“RocketHub is proud of our creative community – and now crowdfunding gives artists the ability to bring ideas directly to fans,” says RocketHub CEO Brian Meece. "I like to think of crowdfunding as the new 'like' button."

Creative Studio was conceived to assist artists – including filmmakers, musicians, dancers and visual artists – seeking to fund their projects, and provided pre-launch tips and training to “Stand Up” and its sister projects prior to launch. Ovation is also promoting the program throughout the 30-day crowdfunding campaign, and will award three projects with $5,000 in funding based on their creativity, buzzworthiness and potential for success. Ovation plans to produce a special on Creative Studio to air sometime next year.

Canyon Diamond Media is a Raleigh-based production company formed to make films with themes based on scriptures of the world’s religions. “It’s been a tremendous boost to receive coaching from experts at Ovation and RocketHub,” said Withem. “The guidance from Josh Zimmerman at Ovation and Gustavo Rodriguez at RocketHub leading up to the crowdfunding campaign launch has proven invaluable.”

New York-based Niko Tavernise is coproducing “Stand Up” and will serve as cinematographer. He has worked on major feature films and television series as cinematographer, still photographer and visual effects coordinator; his feature credits include “Black Swan,” “Moonrise Kingdom,” “Gods Behaving Badly,” “The Wrestler,” “Precious” and “The Amazing Spiderman 2,” and on television, HBO’s “Codes of Conduct” and Starz’ “Power.”

Canyon Diamond Media’s previous project, “A Rude Awakening,” is a comedy-mystery short about a young woman who suspects her doctor of identity theft. The film debuted at FilmSPARK in Raleigh, NC, in September 2015 and is being submitted to festivals throughout the country.

Ovation is an independent television and digital media company dedicated to all forms of arts and culture. Ovation’s programming, available to nearly 50 million subscribers nationwide, includes documentaries, films and original series. Through The Ovation Foundation, the company is committed to advocating for the arts, nationally and locally, and has provided more than $15 million in contributions and in-kind support to arts institutions and arts education.

RocketHub is one of the world’s most-recognizable crowdfunding platforms. The company has been featured in The Wall Street Journal, The New York Times, Variety, Rolling Stone, National Public Radio, Wired, The Economist, and USA Today, while helping thousands of people raise millions of dollars globally. In 2015, the company was acquired by EFactor Group, the premier business network for entrepreneurs, designed to provide a variety of tools and business services to help drive business success.