Pit bull victim groups launch national advocacy website NationalPitBullVictimAwarenessDay.org to raise awareness of the social and financial costs of pit bull attacks. The initiative, sponsored by Daxton's Friends for Canine Education and Awareness, seeks to call attention to the scope and severity of this urgent public safety issue. #NationalPitBullVictimAwarenessDay 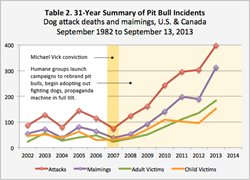 Incidence of pit bull attacks in the US and Canada.

The National Pit Bull Victim Awareness Day website lists more than 50 organizations and advocacy groups from across the continent whose purpose is to alert the public to the pit bull crisis.

A North American coalition of over 50 pit bull attack victim support groups has launched an information website -- NationalPitBullVictimAwarenessDay.org -- to coincide with National Pit Bull Awareness Day, which is being held this year on October 24.

NationalPitBullVictimAwarenessDay.org provides information on the growing issue of attacks on humans and animals by pit bulls, and is intended to help citizens, policymakers and elected officials better understand the scope of this increasingly urgent public safety issue.

As reported by Merritt Clifton, Editor of Animals 24-7 on October 3, 2015, “Although only 5% of the U.S. and Canadian dog population are pit bulls, in the past nine years pit bulls have accounted for 80% of the dogs involved in fatal and disfiguring attacks, resulting in two-thirds of the deaths and disfigurements.”

The National Pit Bull Victim Awareness Day website outlines the effect of pit bulls on families and communities with respect to public safety, and their often devastating social and economic impacts. Various stakeholders in the pit bull issue are identified and addressed, including taxpayers, legislators, emergency and healthcare workers, animal control officers, law enforcement agencies, pet owners, farmers and humane organizations, among others.

The website features state-by-state reports of serious pit bull attacks, disfigurements and fatalities, along with state and local legislation pertaining to the breed.

According to Colleen Lynn, Founder of DogsBite.org, a national dog bite victims' group dedicated to reducing serious dog attacks, "Despite clear evidence that pit bulls are responsible for a substantially disproportionate number of attacks, maimings and deaths, humane groups and tax-payer funded animal shelters continue to encourage the public to adopt pit bulls by specifically promoting them through initiatives like Pit Bull Awareness Month." According to Clifton’s research, since 2010, 30 pit bulls and 7 bull mastiffs adopted from shelters have killed people.

Often overlooked as victims are the pit bulls themselves. Pit bulls are the breed of choice for dog fighters, which is why People for the Ethical Treatment of Animals (PETA), as reported in TIME Magazine, June 20, 2014, supports mandatory spay/neuter programs specifically for pit bull type dogs in order to end this inhumane activity, as well as the rampant overbreeding leading to pit bull euthanization of almost one million per year.

National Pit Bull Victim Awareness Day (NPBVAD) evolved out of the need to amass the growing number of pit bull victim groups into a central online support hub. "As the numbers of dead and disfigured by pit bulls continue to increase, our concerns are still not being sufficiently addressed by elected officials," states Jeff Borchardt, Founder of Daxton's Friends for Canine Education and Awareness. Borchardt's 14-month-old son Daxton was fatally attacked by pit bulls in early 2013.

NationalPitBullVictimAwarenessDay.org lists more than 50 organizations and advocacy groups from across the continent whose purpose is to alert the public to the pit bull crisis.

NPBVAD also maintains a list of pit bull victims who are available for interviews with the media.

About DogsBite.org:
DogsBite.org is a national dog bite victims' group dedicated to reducing serious dog attacks. Through our work, we hope to protect both people and pets from future attacks. Our website, http://www.dogsbite.org, was launched in October 2007 and contains a wide collection of data to help policymakers and citizens learn about dangerous dogs. Our research focuses on pit bull type dogs. Due to selective breeding practices that emphasize aggression and tenacity, this class of dogs negatively impacts communities the most.

About Awareness for Victims of Canine Attack (AVOCA):
AVOCA is a national ad hoc coalition of bereaved families and survivors of canine attack. Our mission is to educate the public about dangerous dogs, and in particular fighting and gripping breeds, with respect to the risk they present to human and animal health and safety. http://www.VoicesoftheVictims.org

About Daxton’s Friends for Canine Education & Awareness:
Daxton’s Friends was formed in honor of Daxton Borchardt, who passed away on March 6, 2013, due to severe injuries sustained in a dog attack. Daxton’s Friends strives to educate the public about the importance of understanding dog breeds and how, with proper education and pet care, the number of dog-related incidents can be reduced. http://www.daxtonsfriends.com/