Limited Edition Ron Hunter bobbleheads from the National Bobblehead Hall of Fame and Museum are now available for sale exclusively at http://www.BobbleheadHall.com/product/ronhunter. 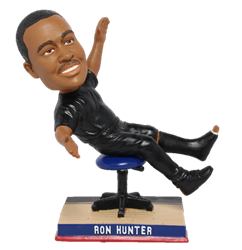 The bobbleheads are only available at www.BobbleheadHall.com/product/ronhunter

Today, the National Bobblehead Hall of Fame and Museum unveiled a bobblehead of Coach Ron Hunter, who gained notoriety this March when he fell off his chair after his son R.J. hit a game winning three pointer in the NCAA Tournament. The father-son story became one of the great stories of March as Coach Ron and his son R.J. shared many special moments in the spotlight.

"Like millions of Americans, I have always been captivated by the NCAA Tournament, and this was one of the most memorable moments of the Tournament. R.J.’s long-range three-pointer followed by Ron falling off his chair made Georgia State’s upset win even that much more memorable and exciting,” said Phil Sklar, Co-Founder and CEO of the National Bobblehead Hall of Fame and Museum. “After the tournament ended, we realized that a bobblehead of Ron would be the perfect way to capture this unique moment forever.”

Ron Hunter is currently the coach of the Georgia State Panthers Men’s Basketball team. Ron has coached the Panthers for 4 years, including a very memorable 2014-2015 season, in which Ron led the Panthers to the NCAA Tournament. The 14th seeded Panthers upset victory over the 3rd seeded Baylor Bears was one of the Tournament’s most memorable games, with Ron’s son, R.J., hitting a game winning three pointer.

"This will be a great memento for current students, alumni, faculty, administrators, basketball fans and collectors,” said National Bobblehead Hall of Fame and Museum Co-Founder and President, Brad Novak. “We are excited to capture what are arguably the two most memorable and unique moments from the 2015 NCAA Tournament in bobblehead form after creating the Ron Hunter and Roxanne Chalifoux bobbleheads.”

The bobbleheads are only available at http://www.BobbleheadHall.com/product/ronhunter for $25 plus shipping. $1 from every bobblehead sold will go directly to Samaritan’s Feet, a charity that Coach Hunter has supported for nearly a decade. The bobbleheads are in stock and ship now.