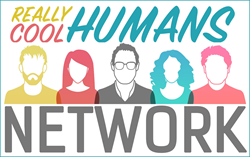 The best stories, from the world’s most amazing people have yet to be seen on TV,” said MaryLyn Linge, Producer. “People are hungry for good content accessible on digital TV. The Really Cool Humans TV Network will that content.

Founders of the Really Cool Human Digital TV Network were inspired by Troy Dunn, TV producer, The Locator, and star of UP TV's hit show "Last Hope with Troy Dunn" to create amateur content for digital TV so people with good stories who would not usually have the chance to be on TV and amateurs with a cool story could have a platform to shine.

According to Executive Producer, MaryLyn Linge, with the amount of digital tv being consumed on mobile devices and living room TV sets and projections of cable-cutting viewers growing by 138% in 2015, she knew they had an exciting window of opportunity to share content that may never be seen on traditional TV.

“The best stories, from the world’s most amazing people have yet to be seen on TV,” said MaryLyn Linge. “People are hungry for good content accessible from their tablets, phones and TV. The Really Cool Humans TV Network will provide powerful and inspirational content.”

Really Cool Humans TV (RCH TV) shares on digital tv the stories, strategies and solutions of real people who the world may not have heard about on traditional media platforms. The RCH TV network season lasts from January 21st to May 31st with new episodes available online weekly. Its second season starts in June. Viewers can access all episodes in each season of the Really Cool Human TV network with internet streaming devices ranging from the Roku Box, Apple TV, Amazon Fire, Chromecast, Xbox 360, et al.

Really Cool Human, Laura Jacobs, A Healer in Every Home