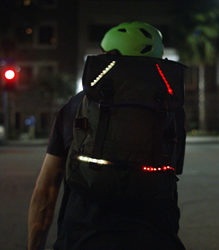 Lumenus blends smart active lighting and 3M™ Scotchlite™ reflective creating maximum visibility. Existing safety gear just isn’t cool, so creating pieces that fit your lifestyle off the road, while saving your life on it, is at the heart of Lumenus.

Lumenus, a Los Angeles-based designer of LED illuminated apparel and accessories for cyclists, runners, pedestrians and motorcyclists, unveiled its first products today on Kickstarter. The Kickstarter collection includes: two jackets, a vest, and a backpack featuring embedded LEDs designed to save lives. They are available exclusively to Kickstarter backers at $100-$150 discount for supporting the brand’s final development and initial production run.

The patent pending Lumenus app, built on top of the Google Maps API, acts as the brains of the system. The brake lights automatically engage as the user decelerates to prevent rear end collisions, indicator lights flash amber as the wearer approaches their turn, and the pieces go into strobe mode to further alert vehicles while crossing intersections. Additionally, users can input their desired pace and the on-garment performance meter changes colors to provide constant visual feedback.

Lumenus was formed in January of 2015 when Jeremy Wall, the innovator, joined forces with the founding team of Outdoor Tech to launch a new brand into the market with the intent of delivering products designed to save lives. With a background in fashion development, Wall’s design process is human-centric and focuses on style, fit and performance. When the LED lights aren’t in use they’re invisible so the product maintains a casual athletic appearance that is attractive in a wide range of social environments.

“As a commuter cyclist I have felt unsafe for years on the roads, especially during the early morning hours or after sunset. When the sun goes down, my guard has to come up,” Wall said. “While reflective elements are essential, they require direct light to illuminate them which is often too late. Lumenus blends smart active lighting and 3M™ Scotchlite™ reflective, creating maximum visibility in all conditions. Existing safety gear just isn’t cool, so creating pieces that fit your lifestyle off the road, while saving your life on it, is at the heart of Lumenus.”

The four initial pieces have expected retail pricing from $200 to $350 and are available for pre-order through Kickstarter October 29-December 29 for up to $150 off suggested retails in exchange for helping fund the brand's final development and initial production run. The entire line will be presented at CES 2016 and available through leading cycling, running, moto, and outdoor retailers beginning June 2016.

ABOUT LUMENUS
Lumenus, based in Los Angeles, is creating the next generation of wearable, washable technology made to save lives. The beautifully designed tech-laced apparel and accessories collection for runners, cyclists, motorcyclists and pedestrians, features embedded LED lights that connect with a first-of-its kind Lumenus mobile app to deliver optimum lighting, and maximize visibility all through an innovative #ZeroUI design.