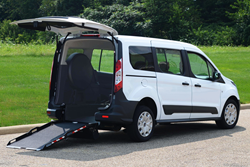 Following customary SEC conditions, a merger agreement announced back in August between WMK, Inc., dba, "MobilityWorks" and HASCO Medical was officially completed on Wednesday, October 28, 2015. MobilityWorks is the largest accessible van dealer in the United States. HASCO Medical was the parent company of mobility van dealerships Ride Away and Mobility Freedom.

Located in Dallas, TX, HASCO was a publicly traded company subject to SEC federal securities laws and filings (OTCQB: HASC). Shares were converted to $0.0233 in cash, representing a purchase price of $23.5 million. Together under one privately held company, the merger creates the largest group of consumer accessible vans dealers in the world and a commercial manufacturing subsidiary called TransitWorks.

"The merger with HASCO will allow us to take care of over half of the people in the USA. They have a great group of people that care deeply about their clients and we are glad to have them on our team," said Bill Koeblitz, President/CEO of MobilityWorks.

MobilityWorks, with 35 consumer showrooms and HASCO Medical, with 22 showrooms, will have a combined 57 locations in 21 states. TransitWorks provides custom commercial vehicles to transportation customers such as assisted living centers, group homes, medical facilities, hotels, taxi and other transit providers.

"This is an exciting time for all of us. The Ride Away and Mobility Freedom showrooms will be a great addition to our sales and service operations," said Eric Mansfield, Vice President of MobilityWorks. “The clients will have more locations to get service, or rentals, and a lot more options toward the selection of a vehicle.”

MobilityWorks was recently recognized for the tenth time on Inc. 500|5000 List with a three-Year Sales Growth of 111%. They have been ranked by Inc. dating back to 2005, the same year that MobilityWorks co-owners Bill Koeblitz and Taylor Clark were named as Ernst & Young's Top 10 Entrepreneurs of the Year.

MobilityWorks is an Ohio-based Inc 500|5000 company with more than 750 full-time employees throughout the country. They are the USAs largest mobility dealer of wheelchair accessible vans. Founded in 1997, MobilityWorks now has 57 showrooms in 21 states. TransitWorks, a wholly owned subsidiary of WMK, Inc., is the largest converter of full-size commercial wheelchair vans in the country. For additional information about MobilityWorks, go to http://www.mobilityworks.com.