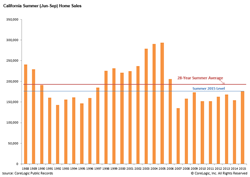 The Federal Savings Bank thinks this news underlines the growing competition in the market. The lender knows the market is struggling with limited inventory while the number of pre-approved American’s is growing. As the nation’s unemployment rate remains are multi-year lows, American’s are finding themselves with better debt-to-income ratios and savings for a down payment on a home. Thanks to all the new jobs created and filled, Americans are getting approved for home loans by the hundreds of thousands. Home listings are often sold in multi-bid scenarios where the highest bid wins. There are few cash buyers since home prices have increased steadily since 2012. Corelogic points this out by stating “The combination of rising demand and a relatively thin supply of homes for sale has kept upward pressure on California home prices, which have been rising on a year-over-year basis for around three and a half years. The median price paid for a California home in September 2015 was $406,000, down 0.6 percent from $408,500 in August and up 5.5 percent from $385,000 in September 2014.” This latest median home price figure is a bit below the highest level hit in June and July “when it was $415,000 – the highest for any month since November 2007, when the median was also $415,000.”

The Federal Savings Bank thinks now is a wonderful time for a first-time home buyers to apply and get approved for a 30-year fixed mortgage for a rate just above 4% after points and credit scores are reviewed. Readers should expect even more individuals to enter the market place next year and now is the time to be pre-approved and shop hard for a bargain in the winter months.