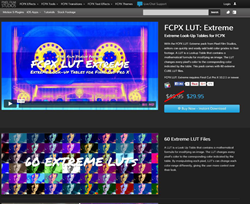 With 60 different color gradings to choose from, users can make any project look anywhere from hipster to campy in the click of a mouse.

With the FCPX LUT: Extreme pack from Pixel Film Studios, editors can quickly and easily add bold color grades to their footage. A LUT is a Lookup Table that contains a mathematical formula for modifying an image. The LUT changes every pixel's color to the corresponding color indicated by the table. By manipulating each pixel, a LUT can change each color range differently, giving the user more control over their look. This pack comes with 60 extreme CUBE LUT files.

Inspired by many bold film looks, FCPX LUT: Extreme can instantly make give any footage a thermal scan or psychedelic feel. From X-ray film to infrared filters and everything in between, CUBE LUT files are extremely versatile. They can be used with many different software. With the FCPX LUT: Extreme pack from Pixel Film Studios, editors can quickly and easily load a LUT file directly into Final Cut Pro X to color correct or grade their footage without having to use other software. Users can simply drop the loader on top of their footage, and then use the drop down menu to select or import a CUBE file.

If the LUT doesn't fully achieve the desired look, editors can use the built-in customization controls in the FCPX LUT: Extreme program to adjust the strength, contrast, brightness and saturation of their image. They can also make further adjustments to color of the light, dark and mids.

Once users have their desired color grade applied to their footage, they can add one of the distortion filters included with the plugin to complete the look. The FCPX LUT: Extreme pack comes with posterization, threshold, halftone, underwater, insect eye, crystallize, vignette, and film grain filters. With 60 different color gradings to choose from, users can make any project look anywhere from hipster to campy in the click of a mouse.

“Final Cut Pro X is lacking some essential plugins. We intend to satisfy the needs of fans of FCPX around the world and get them what they need," said Christina Austin, CEO of Pixel Film Studios.