Minden kicks off the Christmas season with its signature events, the German-inspired Fasching Fifth Season Celebration and Lights Fantastic. This Louisiana Holiday Trail of Lights city celebrates its German heritage as it decorates the Downtown area with thousands of Christmas lights, over one hundred life-sized nutcrackers, and a grand fireworks display. 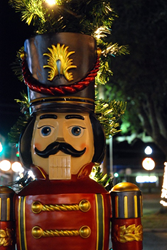 Over one hundred life-sized nutcrackers like the one shown can be found in Downtown Minden during the Christmas season.

With thousands of Christmas lights and over one hundred life-sized nutcrackers throughout the downtown area, this partner city of the Louisiana Holiday Trail of Lights will kick off the holiday season on Nov. 21 with fun, food, and German flair.

Deemed the “Friendliest City in the South,” the folks from Minden invite visitors to celebrate the Christmas season with them as the city dresses up for the holidays. With thousands of Christmas lights and over one hundred life-sized nutcrackers throughout the downtown area, this partner city of the Louisiana Holiday Trail of Lights will kick off the holiday season on Nov. 21 with fun, food, and unique German flair.

In 1835, Charles Veeder built an inn on a hilltop a few miles from Bayou Dorcheat. By 1837, he had laid out a town and named the settlement Minden, after the home of his ancestors in Germany. One year prior to Veeder’s arrival, a group of German Utopians, who followed the mystic “Count Leon” to North America, established a settlement seven miles northeast of Minden, known as the Germantown Colony. From this rich German heritage springs the city’s annual Fasching Fifth Season Celebration. While visiting, history enthusiasts can enjoy free tours of the Germantown Colony Museum as well as the Dorcheat Historical Museum.

“Fasching,” also known as the “Fifth Season,” is the German holiday season that has made its way to Minden, Louisiana in the form of a German-inspired festival held around the Christmas season each year. On Saturday, Nov. 21, the original brick-paved streets of Historic Downtown Minden will be filled with German food, three beer gardens, and all things German starting at 10 a.m. Live music from various genres will play from three stages throughout the day, and Weihnachtsmann--more frequently called Santa Claus, will be in attendance for fun and photo opportunities. The Fasching Fifth Season Celebration will conclude with a grand fireworks finale and the Fasching Fifth Season Lights Fantastic, during which the holiday lights will be officially switched on. Families can then enjoy a self-driving tour of the Christmas lights after dark each day from Nov. 21 until Jan. 4.

###
NOTE TO MEDIA: High-quality, high-resolution photographs of signature events for the Louisiana Holiday Trail of Lights are available for use. For more information, contact Morgan Byrd, Communications Intern, at mbyrd(at)NatchitochesLA(dot)gov or at 318.352.2746.