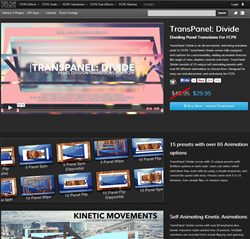 All the customization controls are located in the FCPX inspector window and can be viewed in real-time as well as adjusted on the fly.

TransPanel: Divide comes with 15 unique presets with limitless options in each style. Users can select which animation they want with by using a simple dropdown, and control the speed with ease. Presets come with 5 to 15 divisions, from simple flips, to random wipes.

TransPanel: Divide comes with over 65 keyframe-less kinetic transition styles packed into 15 presets. Multiple variations are included from simple flipping and spinning transitions, to randomly generated arranging and re-arranging styles. No animating is necessary and users can change the style of speed from a simple drop down.

TransPanel: Divide allows users to change the angle of view from the camera, and adjust the shadow controls within each transition. This gives the audience a real sense of the third dimension, immersing the viewer into each movement. Simple control changes allow hundreds of looks and styles to be made within seconds.

TransPanel: Divide is designed as a simple transition pack for FCPX. Users simply select the desired style, apply it to the timeline between clips, and stretch them to the appropriate length. All the customizable controls are located in the FCPX inspector window and can be viewed in real-time as well as adjusted on the fly.