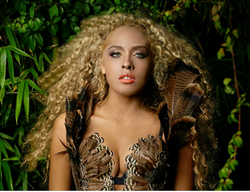 I am honored to be embraced by my West Indian people.

Zhavea, also known as “The Warrior Princess Of Pop,” has made her mark with two number one songs in the Caribbean this summer & fall. “Gimme That Love” ft Beenie Man topped the MTV Tempo chart for six consecutive weeks, and her single “Tun-Up” remained at the top of the same chart for eight weeks.

“I am honored to be embraced by my West Indian people,” said Zhavea, who spent the entire carnival season in Grenada promoting her new single, “Johnny,” produced by top Billboard producer Rohan ’Snowcone’ Fuller.

Fans have witnessed an amazing performance by the Grenadian/American beauty, as she owned the 2015 Sumfest stage in Jamaica, delivering an energetic and entertaining performance to a sold out crowd.

With a devotion to music that started since childhood, Zhavea is prepared to take her music to new heights. She notched another number one spot on the MTV Tempo chart with her single “Shut It Down,” written and produced by Yoftahe Zewdu and JNAT beats. “Shut it down” would become her third number-one single in the Caribbean this year.