Interactive Timeline of the History of Marijuana Legalization

Attorney announces the creation of an interactive timeline detailing the history of marijuana legalization in the United States. 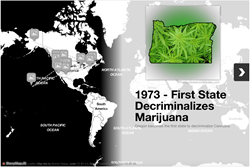 As more and more States consider both the use of medical marijuana and even the outright legalization of marijuana, it’s informative to look at the historical trends and the public’s growing acceptance of marijuana.

Other States look at Colorado’s robust marijuana regulations, and the fact that Colorado hasn’t devolved into a lawless society as many predicted, and they see the potential tax revenue and cost saving from a decreased strain on the criminal justice system, and we’re seeing more and more proposals on ballots across the country.” Attorney Rodemer noted that Colorado’s largest Army base, Fort Carson, has actually seen a decrease from 725 soldiers testing positive for marijuana in the year prior to Colorado legalizing recreational marijuana, to 422 after the change, a 58% reduction, according to the Colorado Springs Gazette.

Moreover, the number of fatal traffic accidents in Colorado was actually 6.5% lower in 2014 than it was in 2011, the year before Colorado’s legalization, according to the Colorado Department of Transportation. “What we’re seeing is that the predictions haven’t played out the way marijuana opposition groups promised. Colorado has created robust laws and regulations regarding marijuana, including Colorado’s new DUI-Marijuana law, so other States are seeing the success of legalization in Colorado and Washington, as well as waning public support for continued criminalization's, and we’re seeing the question of legalization pop up on ballots across the country”. An interactive timeline of marijuana legalization can be found at: http://www.coloradospringscriminaldefense.net/timeline-marijuana-legalization/.

Steve Rodemer is a criminal defense attorney and dui defense lawyer in Colorado Springs at The Law Office of Steven Rodemer, LLC. Steve is a former prosecutor and has been named as one of the “Top 40 Attorneys Under 40” by the National Trial Lawyers for the past four years, a “Top 100” DUI Attorney by the National Advocacy for DUI Defense for the past three years, and named as a “Rising Star” by SuperLawyers in 2014 and 2015. Steve has been selected by the Denver Post as one of the Top Attorneys in Colorado in 2014 and 2015 and holds the rating of “10/10 Superb” Avvo.com. More information can be found at http://www.coloradospringscriminaldefense.net.