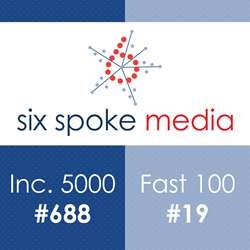 You have to remember that the average company on the Inc. 5000 grew nearly six-fold since 2012. Business owners don’t achieve that kind of success by accident.

For the second year in a row, digital advertising firm Six Spoke announced today that it has made both Inc. Magazine’s 2015 Inc 500|5000, an exclusive ranking of the fastest-growing private companies, and San Francisco Business Times’ list of The Bay Area’s 100 Fastest-Growing Private Companies.

This year Six Spoke ranked #688 on the 2015 Inc 500|5000 amongst brands such as Fitbit, Smashburger, and Planet Fitness. Past powerhouse honorees include the likes of Microsoft, Intuit, Zappos, Patagonia, and Under Armour. Six Spoke was recognized for its ranking amongst over 1,500 leaders from a wide-variety of industries at the Inc. Conference & Awards Gala in Orlando. Trang Doan, Sr. Director at Six Spoke, accepted the award on behalf of the agency. “It was a tremendous honor and accomplishment for our team, especially given the company we shared on the list,” said Doan. “I couldn’t be more proud of our team’s hard work.” Inc. President and Editor-In-Chief Eric Schurenberg added the following about the esteemed group of companies, “You have to remember that the average company on the Inc. 5000 grew nearly six-fold since 2012. Business owners don’t achieve that kind of success by accident."

On the Bay Area’s Fast 100, Six Spoke came in at #19. All of the companies on the list had their revenues spike by at least 50 percent over 2012, with Six Spoke experiencing more than quadrupled growth. Members of the global firm were in attendance at the awards event held at the Fairmont Hotel where The SF Business Times unveiled the rankings and commemorated the achievements of other up-and-coming companies such as iCracked, Fluxx Labs, Visual.ly and inDinero.

About the San Francisco Business Times Fast 100:
In order to be considered in 2015, a company must be an independent, privately-held corporation, headquartered in the Bay Area, have a three year sales history of 2012, 2013, and 2014, a net revenue of more than $200,000 in fiscal year 2012, and have all fiscal documents verified by global accounting firm Grant Thornton, LLP.