GrassrootsHealth and the Medical University of South Carolina co-authored a research paper, published on November 10, which finds that women with vitamin D levels of 40-60 ng/ml have a 46% lower preterm birth rate than the general population. Simple changes to standard of care could help prevent 225,000 preterm births a year, one medical center has already made this change. 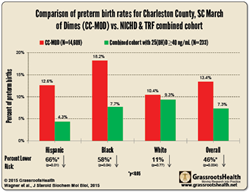 It is time to change, to get ahead of the curve.

GrassrootsHealth announces that on November 10, 2015 a study published in The Journal of Steroid Biochemistry and Molecular Biology showed a 59% lower risk for premature birth by pregnant women who had blood levels of vitamin D (25(OH)D) at or over 40 ng/ml by their third trimester than women who had levels below 20 ng/ml. The study combined data from two recent vitamin D supplementation trials for pregnant women in South Carolina.

Lead author, Dr. Carol Wagner and her colleague, Dr. Bruce Hollis of the Medical University of South Carolina (MUSC) have been studying the relationship of vitamin D and pregnancy for almost 10 years. They have previously authored papers from two groundbreaking randomized control trials that had women taking what were considered at the time to be high doses of vitamin D (the trials called for 400 IU/day as the control group, 2000 IU/day, and 4000 IU/day). The trials focused on supplement amounts, but vitamin D blood levels – 25(OH)D – were also recorded.

For this analysis, the authors shifted from a focus on which supplementation group the study participants were in to what blood level of 25(OH)D they reached, regardless of supplementation dose. They also compared the data on preterm birth rates in the study group to general population rates in the same area, represented by published data from the March of Dimes for Charleston County, South Carolina (CC-MOD).

Compared to CC-MOD, the researchers observed an overall 46% lower risk of preterm birth from study participants who had 25(OH)D concentrations of at least 40 ng/ml. The findings were more robust in Hispanic and Black women. The research team proposed that this may be due in large part to the lower levels of vitamin D typically seen in Hispanic and Black women compared to white women.

Another key finding was a steady increase of gestation time (how long the baby stayed in the womb) correlating to the rise of vitamin D up to around 40 ng/ml where it reached a plateau.

The March of Dimes estimates that the annual cost of preterm births in the United States as $12 billion (for 455,918 children). If approximately 50% of preterm births could be prevented in the general population, as this analysis suggests is possible, there could be $6 billion available for other services and, more than 225,000 children and families spared this trauma.

Results from the original supplementation trials and this new analysis have led to a change in the standard of care provided at MUSC. Every new prenatal patient is now screened for vitamin D deficiency, and when necessary given a vitamin D supplement, usually 4000 IU/day to start, to help them get their serum levels to at least 40 ng/ml by their third trimester.

“We have been aware of the vitamin D deficiency state in the vast majority of our Caucasian patients and almost all our Black patients for far too long. Now the evidence has accumulated of the high price we pay in terms of prematurity and other obstetrical complications from our failure to systemically address these deficiencies in maternal vitamin D levels. It is time to change, to get ahead of the curve," says Dr. Roger Newman, Director of Women's Health Research, MUSC.

“We applaud the Medical University of South Carolina for taking action to implement both the ethical and practical vitamin D methodology – they lead the way with moving research into practice through this Protect our Children NOW! project” says Carole Baggerly, Director of GrassrootsHealth and co-author on the paper. “Other medical centers are already on board to implement the new standard of care.”

GrassrootsHealth is a nonprofit public health research organization dedicated to moving public health messages regarding vitamin D from science into practice. It has a panel of 48 senior vitamin D researchers from around the world contributing to its operations. GrassrootsHealth is currently running the D*action population intervention program, a targeted program for breast cancer prevention and Protect Our Children NOW! – a program to reduce the complications of vitamin D deficiency encountered during pregnancy and childhood.