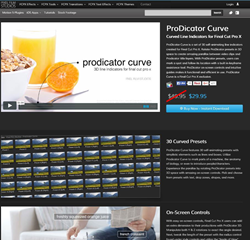 ProDicator Curve features 30 self-animating presets with simplistic elements such as lines and boxes. Utilize Prodicator Curve to mark parts of a machine, the anatomy of biology, or even to introduce people/characters. Experience the parallax by rotating ProDicator presets into 3D space with amazing on-screen controls. Pick and choose from presets with text, drop zones, shapes and more.

With easy on-screen controls,Final Cut Pro X users can add an extra dimension to their productions with ProDicator 3D. Manipulate both Y & Z rotations to exact the angle desired. Next, tweak the length of the preset with the radius control found under style controls and utilize the "Angle of View" slider to increase the degree of camera skew. Create awesome parallax with ProDicator Curve.

ProDicator Curve's design is extremely minimalistic, making it the perfect complement to almost any Final Cut pro X project. Change the color, manipulate the opacity or add a border. All the options needed to create sleek, modern and simplistic designs are all packed into ProDicator's 30 presets.

ProDicator Curve is extremely easy to use in Final Cut Pro X. To use ProDicator, simply drag a preset into the FCPX timeline. Next, stylize the text and customize the elements of the preset using controls found in the inspector window. ProDicator Curve will automatically animate itself in and out at the correct speed. Pixel Film Studios makes amazing easy in FCPX.