The Roger Davidson Trio and special guest Hendrik Meurkens give an engaging performance at a Brazilian music concert and book signing of the newly released songbook, To Brazil with Love. 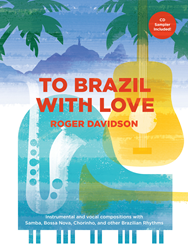 To Brazil with Love Songbook by Roger Davidson

The [compositions] are catchy, lyrical, and full of heart – worthy tributes to Brazil, the land of Roger’s dreams.

To Brazil with Love features 120 original Brazilian compositions by Roger Davidson and has received accolades from music reviewers and fans for its artistic and technical merits. “Roger conveys that all-consuming sense of joy that is just as key to the Brazilian character,” wrote James Gavin, author of Deep in a Dream: The Long Night of Chet Baker. “The [compositions] are catchy, lyrical, and full of heart – worthy tributes to Brazil, the land of Roger’s dreams.” The book comes with a sample CD of 8 tracks which have been recorded on various Davidson/Soundbrush recordings.

The songbook embodies Roger Davidson’s connection to the spirit and music of Brazil. His passion budded early in his life when he, at the age of 12, first listened to early Bossa Nova recordings of Stan Getz with bossa pioneer João Gilberto. Since that moment, Davidson has followed a lifelong quest to explore the music of Brazil. He has produced five recordings of Brazilian music including the 2 CD set Journey to Rio with some of the finest musicians in Rio de Janeiro.

About Roger Davidson
Roger Davidson, an ordained Interfaith Minister, has devoted his life to channeling his spirituality through music. His acclaimed catalog ranges from chamber, symphonic, and choral pieces to jazz, tango, Klezmer, children’s music, a wide span of Latin and Brazilian music, Universal Sacred Music, and most recently, a solo piano project – Temple of the Soul: Rhapsodies and Meditations for Solo. Davidson is also the founder of Soundbrush Records, a label which promotes intercultural musical collaborations, with the belief that artistic collaboration between different cultures illuminates humanity’s inter-connection.

About Hendrik Meurkens
Hendrik Meurkens, a virtuoso on both the chromatic harmonica and the vibraphone, is deemed as the most important jazz harmonica player since Toots Thielemans. German-born but now based in New York, Meurkens’ recordings and performances garner worldwide acclaim.