Why Friday has become a week long 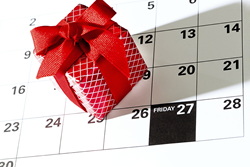 Do retailers want to suffer the same logjam this year? Not in a month of Sundays – or at least a week of Black Fridays.

Last year bargain-conscious Black Friday shoppers spent $1.33bn in the US and £810m online in the UK alone. However, actually delivering the orders proved a tough challenge for some major retailers and small traders. Now global delivery experts Fastlane International say the move by many retailers to make Black Friday a week-long event this year may seem odd, but will help bust the blockage.

Says Fastlane’s Head of Public Relations, David Jinks MILT: ‘ Last year a number of leading UK retailers admitted to disruption to their delivery networks in fulfilling the record amount of orders. Systems are inevitable strained by such a huge artificial spike in demand at the beginning of the Christmas sales period. In the USA 2013 saw significant delivery delays for some retailers, with some gifts failing to arrive for Christmas.’

David explains: ‘’Do retailers want to suffer the same experience this year? Not in a month of Sundays – or at least a week of Fridays. Of course in the UK Asda – the British arm of Walmart - has opted out of the day completely this year. US retailers have decided this year to spread the load. Amazon and eBay are already deep into their deals; Macy’s launches its Friday on Wednesday, and J. C Penny and Walmart on Thursday - Thanksgiving or Brown Thursday as some people are calling it. Sears has already launched its Friday event – but in a cunning twist, for members only. In the UK Amazon, Currys, Boots etc are also avoiding the bottleneck. Argos actually launched its deals on Saturday, and demand was so strong its site crashed for a short while, so there is a consumer appetite for a longer sales period.’

Concludes David: ‘IMRG research indicates 31% of consumers like the idea of tsuch sales, and 1 in 5 shopped on the day last year, with that expected to rise to 30% this year. But having all these products moving at the same time caused warehousing, web and final delivery issues last year, as well as creating needless congestion with that amount of home deliveries packed into a few days. It might indeed seem strange that Friday lasts a week, but if it helps break the log jam, it makes sense in the end. As low cost international delivery experts serving both everyday people and businesses, Fastlane is pleased to see retailers have listened to their delivery partners and distribution centre staff.’

The Fastlane International web site features a blog detailing which retailers have started their sales early, who is holding on until Friday, and who has abandoned the day completely this year: http://www.wedelivertheworld.co.uk