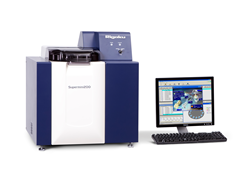 Rigaku Corporation has published a new application report describing the quantitative analysis of soda-lime glass by wavelength dispersive X-ray fluorescence (WDXRF). The method is detailed in Rigaku XRF Application Note #1062 and demonstrates the performance of the Rigaku Supermini200 benchtop WDXRF analyzer in the high-precision analysis of elements in soda-lime glass. The report includes details for measurement conditions, calibration and repeatability.

Soda-lime glass is used in a wide variety of components and products, such as light bulbs for lamps, touch panels, LCD monitors, solar panels, insulators, tableware, containers, windows and mirrors. Although the basic component of glass is silicone dioxide (SiO2), ingredients such as sodium oxide (Na2O) and calcium oxide (CaO) are added to change the characteristics of the glass to better suit the intended use. Adding different elements in designated quantities can change physical and chemical properties, such as melting point, moisture resistance and thermal expansion. Some trace elements also affect color.

The Supermini200™ WDXRF spectrometer, utilized for the analysis described in the report, was designed specifically to deliver excellent performance while eliminating conventional installation requirements such as cooling water, special power supply and large floor space. By selecting the optional sealed proportional counter instead of a gas flow proportional counter, the requirement of P10 gas can also be eliminated.

Nine elements were measured for this application, and calibration curves were generated using four National Institute of Standards and Technology (NIST) standards. The calibration curves obtained using the theoretical alpha corrections show good correlation for both major and trace components. Repeatability tests were completed and the standard deviations for both major and minor components were very small.

The results, provided in the report, show that X-ray fluorescence (XRF) analysis offers precise elemental analysis, enabling control of glass composition in the production process, and that high-precision analysis of elements in soda-lime glass can be performed using the Supermini200 benchtop WDXRF spectrometer.

A copy of this report may be requested at: http://www.rigaku.com/en/products/xrf/supermini/app1062

About Rigaku
Since its inception in Japan in 1951, Rigaku has been at the forefront of analytical and industrial instrumentation technology. Rigaku and its subsidiaries form a global group focused on general-purpose analytical instrumentation and the life sciences. With hundreds of major innovations to their credit, Rigaku companies are world leaders in X-ray spectrometry, diffraction, and optics, as well as small molecule and protein crystallography and semiconductor metrology. Today, Rigaku employs over 1,100 people in the manufacturing and support of its analytical equipment, which is used in more than 70 countries around the world supporting research, development, and quality assurance activities. Throughout the world, Rigaku continuously promotes partnerships, dialog, and innovation within the global scientific and industrial communities.