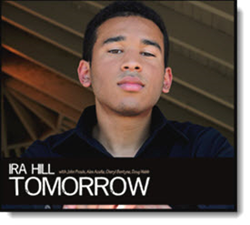 Ira Hill possesses all the ingredients that precede a rise to stardom as a jazz vocalist. The fact that he is only 19-years-old could lead one to believe in reincarnation. ... keep your eyes and ears on Ira to witness his journey to global recognition!

Even as the title of "Tomorrow"—the debut album from Phoenix's Ira Hill—hints at a bright future for the sensational 19-year-old jazz vocalist, it pays its dues to the past by means of an attentive and eclectic set list. In spite, if not also because of Hill's gloriously extroverted vocalese, the album comes across as a vividly personal journey. Hill's tender delivery is much more mature than his years, ensuring that "Tomorrow" is certain to invite a new generation of enthusiasts to appreciate the genre, while impressing scores of seasoned musicians and jazz aficionados. Sample Tomorrow's tracks at cdbaby.com/cd/irahill12. View video: "Billie's Bounce."

"Ira Hill possesses all the ingredients that precede a rise to stardom as a jazz vocalist," said internationally acclaimed jazz, blues and symphony pops vocal luminary, Dr. Dee Daniels. "The fact that he is only 19-years-old could lead one to believe in reincarnation. The composer, educator and mentor continued excitedly, "I suggest you keep your eyes and ears on Ira to witness his journey to global recognition!"

The album’s core trio pianist John Proulx, bassist Kevin Axt and drummer Dave Tull gives young Hill all the space both he and his listeners need to luxuriate in the breadth of his sound. With the trio alone, he turns evergreens like “My Funny Valentine” and “Tomorrow's Another Day” even greener. The hallmark of any jazz singer is not only the way in which he lays out the melodies, but also the way in which he infuses the lyrics with soul. At a tender 19, Hill navigates a familiar songbook as if it were his own, singing as one who means every word. Balancing sophistication and fun, he brings his all to every tune with panache, gratitude and always with a smile.

But it’s really in “Afro Blue,” the album’s slick opener, that one gets the immediacy of his feel for groove and atmosphere. Integrated seamlessly into the trio, along with vibraphonist Craig Fundyga, percussionist Alex Acuna and reedman Doug Webb, Hill buffs every edge until it fits flush with the next.

At every turn of "Tomorrow," one can count on a rich, emotional directness in Hill’s singing. He incorporates several timeless favorites into the album's repertoire, including an uplifting “Billie’s Bounce;” the scintillating staccato of “Cloudburst” in which he duets with The Manhattan Transfer’s Cheryl Bentyne; a swinging “I’ll Remember April” and bright “You’ve Proven Your Point,” which ends the album on a Latin vibe, paying tribute to Ira’s childhood, spent partly south of the border. In all of these, one encounters Ira’s gifts for rhythm and tonal color in spades. Tomorrow is certain to be a much-appreciated holiday gift-giving favorite!

"Ira Hill is coming out of the gate strong. Just in his first week at radio, his CD has hit the Most Added Charts at CMJ and Jazzweek, including the Biggest Gainer Chart," hailed music promoter Kari Gaffney. "Tomorrow" is showing significant promise among the crowded field of jazz releases primed for the end of year push at radio." Most agreeable, Hill's debut album is certain to be a much-appreciated holiday gift-giving favorite.

About the artist:
Born 1996 in Bakersfield, California, Ira spent his earliest years shuttling between the United States and Mexico, before settling in Phoenix, Arizona at the age of seven. His father, a jazz enthusiast, introduced him to the Motown greats on which he, by age 10, Ira would be cutting his teeth. This was the foundation for Hill's inevitable future His ever-supportive father brought 14-year-old Ira to hear Grammy-nominated Count Basie vocalist Dennis Rowland in concert. Before the show, dad introduced Ira to Rowland, who, upon discovering that Ira wanted to sing, gave him an opportunity to perform on stage. He sang the Temptations hit “My Girl” with Rowland's jazz big band. The performance earned the youth a standing ovation, and opened his eyes to a wholly new possibility of self-expression.

After experimenting with other music genres, Hill finally landed smoothly in jazz. During this period of intense artistic development, he benefited immeasurably from mentors Rowland and Grammy-nominated pianist and vocalist Judy Roberts, another fixture of the Phoenix scene.

In addition to vocalists, Ira has learned much by proxy from the likes of Lee Morgan, Dexter Gordon and Bill Evans—musicians whose art allowed Ira to infuse his own musicianship with an instrumental flavor. This is most obvious in his scatting, which at once distinguishes him from his bandmates and humbles him as an equal improviser among them.

Ira Hill credits the time graciously given to him by greats who genuinely care about the up-and-coming generation of stars, and who instilled in him the confidence to brave his first solo. To that end, it was while participating in a Los Angeles jazz workshop that young Ira fatefully met Cheryl Bentyne of The Manhattan Transfer, who was so impressed by his singing that she invited him back to L.A. to lay down this full studio album, which she also produced. Hill has crafted a consummately individual statement that speaks true, sings truer, and promises to be the springboard to a prosperous career.

The new album is called "Tomorrow," and with Ira leading the way, that’s just what we have to look forward to from this young and very talented singer. To learn more about the sensational young vocalist, please visit http://www.irahill.com