Horning Brothers, Inc. concluded the first phase of the renovation program at The Saratoga Apartments on Connecticut Ave., in Northwest Washington, DC, by providing residents and their guests with a new courtyard and custom outdoor kitchens in addition new lobby and corridors. 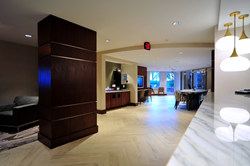 Horning Brothers, Inc and The Saratoga Apartments in NW, Washington, DC recently unveiled results of renovations with an elegant cocktail reception in the newly re-envisioned lobby and courtyard. These renovations are part of an ongoing $2.5M project that included new lighting, flooring and a re-arrangement of the lobby to enhance the comfort for residents and their guests.

Hosted by Horning Brothers, Inc., the building’s owner and manager, the reception showcased the results of a 14 month process that included an Ipad station, Starbucks coffee service, expanded package reception, fitness center renewal and the addition of 3 outdoor kitchens in the newly landscaped courtyard.

Attended by representatives of the Embassies of The People’s Republic of China, Jordan and Mexico, as well as local employers and residents, the evening included music, light refreshments and a champagne toast to celebrate the 26 year old building’s transition from a traditional to a more modern design. “The lobby and hallway renovations showcase The Saratoga’s classic architecture while now offering a modern flair,” said Peter Larson, Vice President, Horning Brothers. “Residents are thrilled with the new look and we plan to continue with interior renovations in 2016.”

The building is home to over 250 residents and has been named a ‘Superior Community’ by customer satisfactions evaluator, Satisfacts, Inc. for the last 3 years.

Founded in 1958, Horning Brothers has developed (and still manages) over $600 million in apartments and retail centers in the Washington, DC area. The company has built 3,000 units of housing in Washington, DC alone. Two of the company's most notable projects are The Saratoga, an award-winning luxury high rise on Connecticut Avenue and Tivoli Square, an adaptive re-use of the National Historic Landmark Tivoli Theater in Columbia Heights. The mixed use project was awarded Washington Business Journal's "Best Real Estate Deal of 2004" and features a 250-seat theater, a 52,000 sf supermarket, 40,000sf of additional office and retail and 40 condominiums.