"... While many people strive to live in harmony with this cosmic impulse and are both in tune with and intentional about expanding their awareness of existence, most of humanity remains overwhelmed ... preoccupied with the business of living, and is dragged along by the expansion of human consciousness kicking and screaming all along the way. "Narada's Children" is a narrative that seeks to illuminate the nature of this reality through story," prefaced the author. 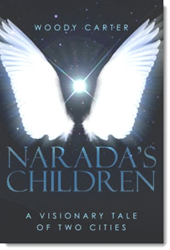 This is a masterpiece. ...it's a story beyond fiction .It's a journey...Woody Carter long time yogi, weaved a story around culture...diversity and belief...with character's that represent diversity with dignity and substance...

Previously published theologian, associate professor and theater arts instructor Dr. Woody Carter is excited to add a transfixing first novel to his literary works. Titled "Narada's Children: A Visionary Tale of Two Cities," the book is a dazzling work of visionary fiction—a spiritual tale of two cities that brings together mystical elements from a diversity of religious traditions to connect far-flung communities with a common African heritage.

Firmly rooted in the Ramayana of India, the narrative begins in an unforgiving desert expanse in the Horn of Africa during the late nineteenth century. Spiritual leader Narada is wandering, without provisions, under a curse that’s the result of his own act of deception that lands him and his 'children' in Oakland, California.

After stumbling to a lush oasis, a young woman invites him to her father’s home in the old walled city of Ja’Usu. She will become one of Narada’s “children,” along with other self-actualizing characters who receive spiritual guidance from the wanderer through the magic of storytelling.

Each evening for seven days, Narada takes his audience on a magical journey to Oakland in 2003, where Arthur Renfro works to improve the health of the African-American community while struggling with spiritual possession and a broken marriage.

Story and audience eventually weave together, illuminating the spiritual process of becoming whole, in spite of all-too-human tendencies such as jealousy and hate, by exploring our limitations and discovering there is more beyond.

ABOUT THE AUTHOR:
Woody Carter, Ph.D. is a narrative theologian who holds a doctorate in theology, religion, and the arts from the Graduate Theological Union, in Berkeley, California.

Carter has served as an associate professor in the Bachelor of Arts Completion Program at the California Institute of Integral Studies in San Francisco and as an instructor in theater arts at several community colleges in the San Francisco Bay Area.

He is a retired executive director of the Bay Area Black United Fund—an identity-based philanthropy in Oakland, California—and the author of the nonfiction work "Theology for a Violent Age: Religious Beliefs Crippling African-American Youth." He divides his time between living in the Bay Area and Saint Croix, US Virgin Islands.