Linda Gross Brown's pastel paintings were accepted into national (and one international) exhibits. She received awards for two of them. 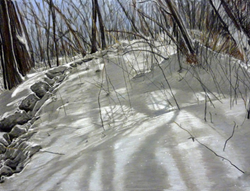 2015 has been a year of accomplishment for Linda, and we can only expect that the new year will bring more opportunities and triumphs for her and her art.

As the year 2015 draws to a close, award-winning pastel painter Linda Gross Brown and admirers of her work can look back on a busy and successful fall-winter season. Linda’s audiences continue to be awed by her masterful use of light, color and texture to pull the viewer into the quietly vibrant intricacies of her landscapes, which are continuing to gain recognition in the art world.

Starting the season off on a brisk pace, Linda’s “Footsteps #10" was accepted in September into the American Artists Professional League 87th Grand National Exhibition, which would take place in New York City in November.

October then began with the exciting news that "Footsteps #7" had been juried into the 3rd Biennial International Exhibition of Pastel Painters, which the ASPAS – Spain Pastel Society will host in Oviedo, Spain, in February 2016. Linda’s painting will compete with works of talented and accomplished artists from around the world.

Later that month and into November, Linda’s “Footsteps #15” and “Tracks in the Sand” were showcased at the Pastel Society of New Hampshire's National Juried Exhibition. Her "Footsteps #15" was awarded second place, drawing praise for the "exacting control of color, dynamic design, strong mark-making."

In December, it was back to New York City for the Catharine Lorillard Wolfe Art Club's 119th Annual Open Exhibition, where Linda's already successful "Footsteps #5" was awarded the Connecticut Pastel Society Award for a Pastel.

This time of the year can be unrelentingly busy, as has certainly been the case for Linda and her pastel paintings, which makes them all the more enticing as the snowy landscapes pull us into a timeless world of quietude and contemplation that reflects the chill beauty of winter. 2015 has been a year of accomplishment for Linda, and we can only expect that the new year will bring more opportunities and triumphs for her and her art.