New study by Queendom.com reveals that people who have a tendency to initiate conflict may be more than just short-tempered. 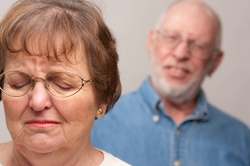 Got a family member who always picks fights? There may be more to this person’s Grinchy behavior than meets the eye.

Just like a soda can that has been shaken one too many times, bottled up resentment will find a way out, often in the form of emotional outbursts.

It’s inevitable: Most people will agree that there is always one family member who can’t help but start an argument at nearly every family get-together. The question is, why?

Research from Queendom.com indicates that although “Holiday Grinches” tend to have difficulty controlling their temper, the source of their Christmas antagonism might be the result of more deep-seated issues, including poor self-esteem and underdeveloped or underused emotional intelligence.

Collecting data from 824 who took their Emotional Intelligence Test, researchers at Queendom focused their analysis on two very distinct groups:

“Some people enjoy picking fights just for the thrill of it, but the truth is that the majority of argumentative people finding themselves getting into frequent fights for a number of reasons – and they might not even know why,” explains Dr. Jerabek, president of PsychTests, the parent company of Queendom. “So you may think that your antagonistic family member is simply short-tempered, nosy, overly critical or just downright mean. However, aside from the issues we highlighted above, he or she could also struggle with impulse control and have trouble holding their tongue, or have difficulty expressing more vulnerable emotions, like fear and sadness, and so they lash out with anger instead.”

“And here are two things from our study that may surprise you: 52% of our argumentative group are actually uncomfortable in emotionally charged situations, like arguments. They also have a tendency to put other people’s needs ahead of their own, even when they don’t want to, which could result in a build-up of resentment and frustration. Just like a soda can that has been shaken one too many times, bottled up resentment will find a way out, often in the form of emotional outbursts.”

So how does one deal with a family Grinch without killing Christmas spirit? Queendom researchers offer some tips:

Instead of saying "You make me so angry me when you criticize my food or my lifestyle," for example, send the message from YOUR point of view; "I feel frustrated when we don’t see eye to eye. I believe in the philosophy ‘to each their own’. Let’s not cast judgments on each other, especially during the holidays. What do you think?” Essentially, say how you feel, why, and ask the other person a question that leaves the ball in his court. Avoid accusatory statement or a defensive tone of voice, however. That will only give an argumentative person more fuel to fight back.

Don’t brush off this old chestnut – it can save you from a lot of senseless fights. Before saying something that could potentially result in an argument, ask yourself these questions: Is what I am about to say worth communicating? Will it be productive? Do I know how to say it in a tactful way? What is the best way to put it? Knee-jerk reactions can get you into a lot of trouble. Besides, wouldn’t you rather enjoy the taste of turkey and pie than the flavor of your foot in your mouth?

We are always trying to figure out the causes of other people’s actions: Why is she so rude? Why does he always pick on people? All too often, we attribute disagreeable behavior on the part of others to dispositional rather than situational factors. For instance, we might tend to write someone off as a jerk for snapping at us, rather than looking for external causes, such as being sick or having been fired that day. As a result, we are less forgiving than many situations call for. Try to understand that others are under just as much pressure and stress as you are and as a result, their behavior may not always represent who they are.

You may find it difficult to get along with a person who is very different from you. Instead of giving up, try to look for good traits or abilities the individual has that you do not. What makes this person special? What strengths does this person have that you can always rely on? As glaring as this person’s faults may be, there is almost always a silver lining somewhere.

Try to find something – anything – that you have in common with a difficult individual. This may be tough, but once you find something you share and express it to the other person (you both like fishing, you both dislike the same politician), you have sent the message that you are capable of thinking in a familiar manner and creating a rapport. That’s a much better place to work from.

Humor has the power to dissipate tension better than anything else. It’s a powerful communication tactic. You can use humor to completely disarm the party pooper and shift the mood in the room. It can allow you to express what you think and feel, empathize, make the most of your differences and find common ground at once. Here is an example that could be used at the holiday table after a political discussion starts heating up: “Well, Uncle Jimmy thinks that I’m a poor liberal sap with a bleeding heart, and I sometimes get so worked up that I feel that he’s a heartless hardcore conservative. But deep down, I know he’s got a heart of gold, like all Moores do, and I love him dearly. Together, we make for a pretty well-balanced team. I wouldn’t have you any other way, Uncle Jimmy!”

If all other attempts to get along have failed, admit to that person that you two just don't get along, and leave it at that. Say that you respect them but for whatever reason there is a personality conflict. Once you have eliminated the pressure to try to get along as best buds or loving family members, you can establish a truce.

Want to assess your emotional intelligence? Go to http://queendom.com/tests/access_page/index.htm?idRegTest=3037

Professional users of the Emotional Intelligence Test can request a free demo for this or any other assessments from ARCH Profile’s extensive battery: http://hrtests.archprofile.com/testdrive_gen_1

It takes a great deal of patience and understanding to deal with the family Grinch.“Holiday Grinches” tend to have difficulty controlling their temper, the source of their antagonism might be the result of more deep-seated issues.