On December 12, 2015, at the American Foundation of Savoy Orders’ 18th Annual Benefit Gala, “Ballo di Savoia” (Savoy Ball), more than 300 patrons, benefactors and guests raised funds for refugee childrens’ aid and other philanthropic initiatives. The Ball was part of a three day weekend of events organized by the American Delegation of Savoy Orders and the Savoy Foundation, continuing the spirit and tradition of charitable giving and hospitaller care of the historic thousand year dynastic orders of knighthood and merit of the Royal House of Savoy. 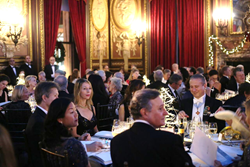 The Ballo di Savoia was truly a memorable night for everyone and a real tribute to the Savoy Foundation volunteer efforts throughout the year. The event provided an outstanding social experience as well as raising needed funds for the charities supported.

The 18th annual Savoy Ball of New York (Ballo di Savoia) at the Metropolitan Club was a much anticipated white-tie event. More than 310 guests attended the sold-out gala soirée for charity on Saturday evening, December 12, 2015. It was hosted by the American Foundation of Savoy Orders, Incorporated http://www.savoia.org and was under the patronage of Their Royal Highness Prince Victor Emmanuel and Princess Marina of Savoy.

The Savoy Foundation is supported by 200 knights and dames in the United States and Canada who are members of the American Delegation of Savoy Orders, historic thousand year dynastic and chivalric Orders of the Royal House of Savoy, which united Italy as a kingdom in 1861.

It was a magical event, reminiscent of courtly European balls of the past, in the Metropolitan Club, a superb venue of the gilded age. The dignitaries and guests, impressive in white tie, tails and decorations for the gentlemen and ball gowns for the ladies, descended the grand marble double staircase, after a glittering champagne reception, to the main ballroom accompanied by the stately march of the Inno Sardo Nationale, the national anthem of the Italy when it was a monarchy under the House of Savoy. The Savoy Ball cocktail hour with hors d'oeuvres was followed by a 3 course sit-down dinner, the Mitch Kahn Dance Orchestra and a sumptuous post dinner Viennese dessert table.

The Savoy Foundation, whose mission is to serve “the poor and the sick,” raises funds for humanitarian projects, including a children's causes, veterans programs, disaster relief for earthquake and flood victims and scholarships for college students. The ball benefited poor, sick and refugee children. Guests were particularly taken by a service dog named "Princess Pepper" who accompanied her disabled veteran mistress, a West Point graduate. The dog was sponsored by a grant to VetDogs of America by the Savoy Foundation last year, as part of Foundation's charitable initiatives for programs to aid disabled veterans.

The ball decorations featured miniature crystal Christmas trees festooned with lighted garland wreaths which set the mood for a white Christmas. The sparkling party upheld the high standard of aristocratic elegance with decorations, opulent jewels and vintage dance orchestra adept with society swing - a perfect blend of European and American cultures. It wasn't until midnight that the dancing finished and the last remaining revelers waltzed out onto Fifth Avenue.

Next year’s ball will be December 10, 2016 at the Metropolitan Club in New York City.

The American Foundation of Savoy Orders, Incorporated, a 501 (c) (3) charitable organization, has established four endowment funds: charitable causes, educational programs, operating expenses and the Savoy Orders Pigott Scholarship Fund. Traditionally, annual grants are made to hospice and social assistance programs, orphanages, and children’s causes throughout the world and emergency disaster relief. In order to raise funds for the support of its activities, the Savoy Foundation sponsors the winter event Savoy Ball of New York ( Ballo di Savoia) and the spring dinner event Festa della Primavera and depends on the generosity of its member knights and dames. The Italian Royal Family, headed by His Royal Highness, Prince Victor Emmanuel of Savoy, actively supports, attends and lends their names through formal patronage of these worthy events and causes. At the international level, H.R.H. Princess Marina of Savoy is the Honorary President of the Swiss Association of the Hospitaller Works of the Savoy Orders based in Geneva, Switzerland. In North America, their Royal Highnesses Prince Emmanuel Philibert and Princess Clotilde of Savoy have actively participated in charitable activities and events with American Delegation and Savoy Foundation officials.

Post-Dinner Dancing at the Savoy Ball at the Metropolitan Club

Savoy Ball of New York at the Metropolitan Club