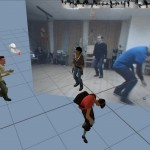 Enabled by its proprietary iPi Recorder software, the new distributed recording feature configures a singlecomputer to record up to 8 USB cameras or a single Kinect 2 sensor. With additional computers, users can add up to 16 USB cameras or four Kinect 2 or Kinect sensors. The software, which merges all of the mocap data into a single file, is used in conjunction with iPi Mocap Studio for tracking up to three actors simultaneously. Its ability to analyze multi-camera (or Kinect sensors) video recordings, using standard PC desktop or laptop computers offers creative professionals a cost effective solution to track 3D human body motions and produce 3D animation.

In addition, the use of more cameras or sensors to capture the multi-actor performances minimizes tracking errors typically caused by occlusion (when body parts are not captured properly), resulting in improved tracking accuracy and reliability, as well as a faster and more accurate production process.

Nikonov notes that the common misunderstanding is that using professional high-definition cameras is a must for accurate motion tracking: “That is true for marker-based systems, but for markerless mocap solutions like ours, high resolution is not that crucial. Inexpensive USB cameras or Kinect sensors can achieve the same accuracy at a fraction of the cost of a marker-based system.”
New Feature Highlights in iPi Motion Capture V 3.0

Pricing and Availability: iPi Motion Capture V 3.0 is available on a subscription-based pricing model. Prices range from $45.00 to $1,195.00 depending on the version of software (Express, Basic, Pro) and duration of subscription. Basic edition provides support for up to 6 Sony PS3 Eye cameras or 2 Kinect sensors, and tracking of one or two actors. The Pro version features full 16-camera / 4 Kinect sensors capability and can track of up to 3 actors. A free 30-day trial for Version 3.0 is available here.

In line with today’s announcement, iPi Soft is also supporting an increase in the number of cameras supported in its iPi Mocap Basic Edition from four to six and has lowered the price 30 percent, providing added performance to a wider audience at a more attractive cost.

Additional details about iPi Soft 3.0 and multi-tiered subscription pricing can be found here.

iPi Motion Capture is a markerless motion capture software tool to track human body motions to easily produce 3D animation. The scalable system is capable of tracking of up to 3 actors and is compatible with first and second-generation Kinect sensors working at the same time on one or several computers to capture complex motions, including 360-degrees turns. It also supports other inexpensive off-the-shelf equipment such as Sony PS3 Eye cameras.

Moscow-based developer, iPi Soft, LLC, develops powerful markerless motion capture software technology that uses sophisticated image processing and computer vision algorithms to recognize and track the human body. The company’s software is used by creative professionals and prosumers around the world to digitize the movement of a human skeleton, rendering it expressive in 3D characters for video games, computer generated films, as well as for medical, military and other applications. For additional information, on iPi Soft, product pricing, product configurations or a 30-day free trial please visit, http://www.ipisoft.com.