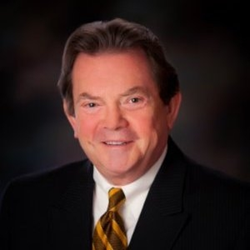 We are pleased to be able to establish this scholarship in his memory and honor so that his legacy in West Georgia will live on and he will continue to positively impact our students and our community through his scholarship. - Tee Green

“Al was a big part of the Greenway family. He, Tee and Brad guided us through the IPO process,” said William “Bill” Esslinger Jr. “He had a huge impact, not only on Greenway, but on our entire West Georgia community.”

Cochran was born on Aug 28, 1947, to Seaborn and Pauline Cochran, of Lilburn, Ga., and was raised with his two younger brothers, Richard and Anthony. He married Gloria Sells Cochran and raised two daughters, Alecia Cochran Mokros and Ali Cochran Morgan. He was blessed with four grandchildren, Madison and Miller Mokros, and Caleigh and Evie Morgan.

Cochran’s departure was felt both personally and professionally in the many lives he touched in the metro Atlanta business community. Recipient of the Atlanta Business Chronicle's CFO of the Year in 2012, his influence and business acumen lead him into boardrooms and leadership positions for companies like Turbochef, Greenway Medical, Amendia, and Vivex Biomedical.

A committee within the Richards College of Business will award the scholarship annually to a student with demonstrated promise in accounting.

“As his friends and former colleagues, we are pleased to be able to establish this scholarship in his memory and honor so that his legacy in West Georgia will live on and he will continue to positively impact our students and our community through his scholarship,” Green said.

“Al was more than just a colleague. He was a friend and a mentor. His experience and interests were broad and his work ethic and quality were exceptional. He came to be known in Greenway circles as ‘the world’s most interesting man.’ We can never replace him, but we are pleased to take this small step so that his legacy will remain in perpetuity,” Esslinger said.

The University of West Georgia is the land of opportunity for approximately over 12,600 undergraduate and graduate students in 86 fields of study. The university is known for its innovative approach to scholarly achievement, creative expression, and service to humanity. It is recognized by U.S. News & World Report magazine as the #47 public university in the South.

Founded in Carrollton, Ga., in 1906, UWG also offers classes at its Newnan and Douglasville centers and online. For more information, please visit westga.edu.