Wild salmon season kicks off with Copper River in mid-May, and continues throughout the summer. Chefs and consumers alike look forward to the season with excitement. 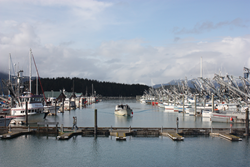 The Copper River Salmon run kicks off the wild salmon season in the Prince William Sound region of Alaska, delighting diners in top restaurants across the United States. Beginning in April, fishermen begin gearing up their boats for another season on the Copper River. Renowned for its remarkable flavor and high Omega-3 content, the Copper River Sockeye run lasts from mid-May until August and continues into the fall when the Copper River Coho salmon run begins.

The Copper River Salmon season is now just a few weeks away. The fishery will likely begin May 14 and will be announced in early May by the Alaska Department of Fish and Game. Fishery managers utilize a variety of tools to ensure that the salmon runs in the area remain sustainable, such as a sophisticated in-river sonar, aerial surveys, and biological catch sampling. Successful fishery management means the Copper River has seen strong numbers of returning sockeye in recent years, and this season should be no exception. In fact, the 2015 sockeye salmon commercial harvest forecast of 2.2 million is the largest pre-season forecast on record.

With the preliminary announcement made by ADF&G, consumers can begin to look for fresh Copper River Salmon at the marketplace beginning May 15.