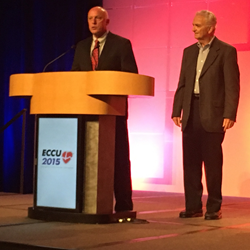 Thanks to immediate CPR, this family could plan for a future, and not a funeral.

Vanneman, a business traveler, heard Gura’s wife Mary Jo screaming and ran from a nearby bookstore to offer assistance. He knew exactly what to do, having been trained as a first responder and volunteer firefighter. He provided CPR with the help of two other bystanders who happened to be nurses, and sent another traveler to retrieve one of the airport’s 47 automated external defibrillators. Vanneman applied the AED, which delivered three shocks and restored Gura’s heartbeat.

Thanks to careful planning and the leadership of airport safety officer Stephanie Lau and Jose Chavez of the San José Fire Department, EMS arrived three minutes after the 911 call. The paramedics administered oxygen, ran an EKG, started an IV, and monitored Gura’s vital signs. He was rushed to O’Connor Hospital, was fitted with two stents, and underwent quadruple bypass surgery. He returned home to Los Angeles a few weeks later.

“My recovery has been excellent,” said Gura, a professor at UCLA. “I have been able to return to work and enjoy my family of four children and six grandchildren. I owe my life to Mike for his quick action in coming to my rescue.”

Mike later met Ira and his family at their home. "It hit me as I drove off that this family could plan for a future and not a funeral, based on CPR being performed at the right time. This event has changed all of our lives."

The Foundation’s 'People Saving People Award' honors 'ordinary' people with extraordinary spirits who help save the lives of SCA victims. The purpose of the award is to increase awareness about the critical need for bystanders to help in sudden cardiac emergencies. Immediate bystander intervention can mean the difference between life and death for victims of sudden cardiac arrest.

Choosing a first place winner for the 'People Saving People Award' proved to be a daunting task. “There were so many inspirational nominations for this year’s award,” said Mary Newman, MS, president of the Sudden Cardiac Arrest Foundation. “Everyone is a winner when bystanders get involved and help save lives. Yet, this case stood out not only because Mike saved Ira’s life, but also because he saved another life just months earlier at a restaurant in Los Altos. For a bystander to save two lives within one year may be unprecedented,” she said.

"I am honored to be the recipient of the 2015 'People Saving People Award,'” said Vanneman. “I, along with the other nominees, are proof that CPR and the use of AEDs saves lives. I can't stress this enough: CPR saves lives!"

The 'People Saving People Award' was presented at the Emergency Cardiovascular Care Update in San Diego. In recognition of his heroism, Vanneman received an award from the Sudden Cardiac Arrest Foundation and two AEDs from Ward Hamilton of ZOLL Medical, one for each life he saved. Vanneman plans to donate the AEDs to lodges in Bucks Lake, CA.

As a two-time lifesaver, Vanneman offers the following advice to other potential rescuers: