Corie Weathers was named the 2015 Armed Forces Insurance Military Spouse of the Year ® today in recognition of her outstanding commitment to the military community. Video of the awards ceremony is available here: http://www.msoy.militaryspouse.com 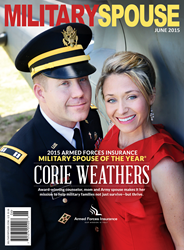 "We applaud the thousands of military spouses who, each in their own way, are a force multiplier to America’s armed forces. On behalf of Armed Forces Insurance, I salute each of you!" said Garry L. Parks, Lt. Gen. U.S. Marine Corps (Ret)

Corie Weathers was named the 2015 Armed Forces Insurance Military Spouse of the Year ® today in recognition of her outstanding commitment to the military community. Video of the awards ceremony is available here: http://www.msoy.militaryspouse.com

Nominated by her husband, Chaplain Matthew Weathers, Corie graduated with a Masters in Counseling and is a licensed therapist in Georgia and Colorado. Her full bio can be found here: http://msoy.militaryspouse.com/vote/#view/19583/2615237

Currently serving alongside her husband at Fort Stewart, Georgia, she spends her time providing therapy to military families and civilians at a local practice and partnering with her husband to serve families in the military with particular emphasis on marriage. She provides professional counseling and education to children, teens, adults and couples who are in need of hope and the restoration of broken relationships. For her compassionate work, Corie was given the Honorable Order of St Joan D’Arc award as well as the Commander’s Award for Public Service. She has also completed certification in Prolonged Exposure Therapy for PTSD from the Department of Defense Center for Deployment Psychology.

With the reach of the Military Spouse of the Year ® organization behind her, Corie hopes to shine an equal light on the mental state of spouses by being a real voice for this challenged and resilient community.

"During each of the eight years of the Military Spouse of the Year competition, the program has grown in awareness, participation and recognition of the contributions military spouses make worldwide,” remarked Garry L. Parks, Lieutenant General, U.S. Marine Corps (Ret.), Chairman of Armed Forces Insurance, the MSOY Title Sponsor. “On this occasion we specifically honor the 2015 Armed Forces Insurance Military Spouse of the Year®, Mrs. Corie Weathers, and applaud the dedication and contributions that earned her this unique recognition. We would be remiss, however, not to also acknowledge the thousands of military spouses who, each in their own way, are a force multiplier to America’s armed forces. On behalf of Armed Forces Insurance, I salute each of you!"

Prior to announcing the overall 2015 Armed Forces Insurance Military Spouse of the Year ®, the finalists from each branch of service were honored at the annual awards luncheon which was hosted at the Fort Myer Officers’ Club and attended by military and civilian VIPs. The Awards were also streamed live via the magazine’s website.

These Branch Winners emerged from a pool of more than 1,500 nominees, advancing through three separate rounds of voting and a judges’ panel review.

The mother of two sons, Corie has been a military spouse for over eleven years.

The Military Spouse of the Year® (MSOY) Award was created and presented by Military Spouse magazine. "Over the past eight years, the MSOY Award has honored hundreds of military spouses for their advocacy and support within the military community. We couldn’t be happier to be welcoming Corie into this family," said Suzie Schwartz, VP of Military Spouse Programs and spouse of former Air Force Chief of Staff General Norton Schwartz.

For more information on the Military Spouse of the Year® Award, please visit http://msoy.militaryspouse.com.

About Military Spouse
Military Spouse magazine and http://www.militaryspouse.com, published by Victory Media, is the leading national magazine and online destination for the nation's 1.1 million military spouses. You can follow us on Facebook at http://www.facebook.com/militaryspouse and on Twitter @MilSpouseMag. Victory Media, a service disabled veteran owned small business, also publishes print and digital platforms of G.I. Jobs magazine, STEM Jobs ® magazine, Vetrepreneur magazine, and has created the Buy Veteran movement powered by NaVOBA.