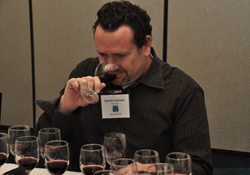 "It’s a great source for wine festival attendees to use when prioritizing which wines to taste at the festival...so many wines, so little time!" said Todd Vucovich, Chief Judge and Director of the Wine Competition.

South Walton Beaches Wine and Food Festival will hold its annual International Wine Competition Friday, January 30, where gold, silver and bronze medals will be awarded in 76 wine categories. During the day-long blind judging process, nearly 600 wines will be critically evaluated in one of the most competitive, extensive and respected international wine competitions in the United States.

“It’s a great source for wine festival attendees to use when prioritizing which wines to taste at the festival...so many wines, so little time! The competition creates excitement for event attendees, participating wineries and distributors. Everyone loves competition,” said Todd Vucovich, Chief Judge and Director of the Wine Competition.

A distinguished group of 24 highly qualified wine judges will convene at Hilton Sandestin Golf and Beach Resort for the International Wine Competition. The judges’ panel is made up of vintners, educators, collectors, restaurant owners and wine-related media. The blind tasting will be conducted with many of the wines that will be shown and sold at the South Walton Beaches Wine and Food Festival.

Upon completion of the medaling process, an intense “grand showdown” of the most highly favored gold medalists will occur to determine a Best of Show White Wine and Best of Show Red Wine.

About South Walton Beaches Wine and Food Festival
South Walton Beaches Wine and Food Festival is an annual charity event held the last weekend of April. The festival features a stunning showcase of the best wines the world has to offer. Celebrity wine producers and chefs present fine wine and food pairings from the world’s most famous appellations. The Savor South Walton Culinary Village offers a sumptuous array of foods to taste, wines to pair, as well as wine and food seminars, cooking demonstrations and live entertainment. The event is a major fundraiser for Destin Charity Wine Auction Foundation, which benefits children in need in Northwest Florida. For more information, including a list of attending winemakers and to purchase tickets, visit http://www.SoWalWine.com