Cosmetic Surgeon Dr. Richard Buckley Comments on Trend Among Women to have Cosmetic Surgery to Look Like Ivanka Trump

There’s a trend among people who are having cosmetic surgery to look like celebrities, including, most recently, Ivanka Trump. Cosmetic surgery Dr. Richard Buckley comments on how this may be an unhealthy trend and why. 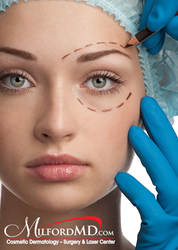 Celebrity influence on the decisions to have cosmetic surgery is growing. Report of patients coming with pictures of Ivanka Trump, asking for surgery to mimic her breasts, nose and facial shape.

Ivanka Trump has beautiful features. It’s natural for women to look at her and desire a similar nose, facial shape or breast size. In my practice, patients often come in with pictures of people who have the physical features they desire.

ABC News reported on two women living in Texas who had plastic surgery to look like President-elect Donald Trump’s daughter, Ivanka Trump. These women are apparently part of a trend among women who want to look like the First Family’s 36-year-old member. Surgeons report that patients are coming in with pictures of Ivanka Trump, asking for surgery to mimic the new icon’s breasts, nose and facial shape. In the news story, two young women spent tens of thousands of dollars and had multiple surgeries to look like Trump’s eldest daughter.

“Ivanka Trump has beautiful features. It’s natural for women to look at her and desire a similar nose, facial shape or breast size. In my practice, patients often come in with pictures of celebrities who have the physical features they desire,” says cosmetic surgeon Dr. Richard Buckley, medical director at MilfordMD Cosmetic Dermatology Surgery & Laser Center, in Milford, Penn. “What’s concerning about this trend, however, is that people want to transform their looks to look like somebody else. That isn’t necessarily a realistic expectation. And it could be a sign for a disorder we look for in cosmetic surgery called body dysmorphic disorder.”

The trend isn’t new but it does seem to be gaining ground. The Huffington Post reported last year that more people are getting surgery to look like the Kardashians. The list goes on to include celebrities from Justin Bieber and Lindsay Lohan to Ryan Gosling and Brad Pitt. The American Academy of Facial Plastic and Reconstructive Surgery announced earlier this year that its annual survey revealed celebrity influence on peoples' decisions to have cosmetic surgery is real and growing. It’s driving what the Academy reports is a 64 percent increase in the number of member facial plastic surgeons who saw an increase in cosmetic surgery or injectable treatments in patients under age 30 in 2015. More than 80 percent of facial plastic surgeon members said in the survey that celebrities are a major influence in their patients’ decisions to have plastic surgery.

“People who have cosmetic surgery to address concerns that make them (not their spouses, partners or others) unhappy often emerge happier and with better self-esteem. Cosmetic surgery can be a wonderful way to boost a person’s self-confidence and well-being. It can change lives in these senses. We’ve seen it time and time again,” Dr. Buckley says. “But, as cosmetic surgeons, we need to ask patients about their motivations, regardless of whether those patients want Botox or breast augmentation surgery. If they’re motivated by what others think or by an image they see on the screen, we have to take a step back to determine whether we can truly meet those expectations.”

In fact, the American Society of Plastic Surgeons suggests there are people who shouldn’t have cosmetic surgery. These include: people who are in crisis, such as those going through a divorce; people with unrealistic expectations, which includes people who want a celebrity’s features or perfection in their looks; people who are impossible to please because they’re expecting cosmetic surgery to fix their problems in life; and people who are obsessed by even minor defects, including those who have body dysmorphic disorder.

“It’s important that patients of any age have realistic expectations about what cosmetic surgery can and can’t do in their lives,” Dr. Buckley says. “Rather than look like others, people should strive to look like the best versions of themselves.”