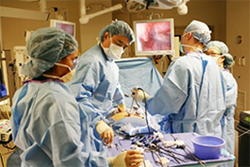 We still don’t have the groundswell of public support for treating obesity like a disease. Many still see obesity as a result of lifestyle choices. And yet, when I looked at the literature 25 years ago it was clear that obesity was not a conscious choice

Community Medical Centers announces that Dr. Kelvin Higa, medical director of Fresno Heart & Surgical Hospital’s Bariatric & Metabolic Surgery Program, was recently elected President of the International Federation for the Surgery of Obesity and Metabolic Disorders (IFSO). Dr. Higa specializes in difficult and challenging cases and is considered an expert on bariatric revision surgery. He and partner Dr. Keith Boone pioneered the current laparoscopic gastric bypass technique used by many surgeons worldwide. He is a past president for the American Society of Metabolic and Bariatric Surgery (ASMBS) as well as its Foundation and was awarded the prestigious ASMBS Lifetime Achievement Award. He continues to chair many international conferences devoted to bariatric and metabolic surgery and organized the first International Consensus Conference on Metabolic/Bariatric Interventions that recently took place in Clovis, CA. Dr. Higa travels more than three months out of the year, lecturing and performing live surgical demonstrations worldwide.

Dr. Higa will be presiding over the IFSO World Congress in 2017 in London and will be spending next year preparing for that. We sat down with Dr. to Higa to talk about his new IFSO position and current trends and research in metabolic surgery.

Q: What do you hope to accomplish as president of this worldwide organization?
Dr. Higa: IFSO is a unique organization as it is the only society that brings every continent, every country together to share ideas and represent our specialty and the patients we serve. It is important that state-of-the-art care is available and accessible to all patients based on need, not social or financial status. I am hoping to continue to fight for individual’s right to health care through dissemination of knowledge and experience. I am also hoping to continue the proud tradition of IFSO of collaboration; working together for a common cause.

Q: Are there new surgeries or metabolic treatments being explored that show hope for patients with diabetes?
Dr. Higa: Yes, there are many new treatments for diabetes and this is exciting. The success of procedures such as the gastric bypass, which has been around for more that 40 years has given researchers the push into looking into why surgery has been shown to be scientifically superior to traditional medical management. This has led to the discovery of incretins and hormones responsible for hunger and appetite as well as glucose control. Rather than just giving more insulin to treat diabetes, newer medications have been developed to work on the insulin resistance part of the equation.

Furthermore, through randomized, prospective studies, surgery has emerged as the gold standard for treatment of type 2 diabetes, when also associated with a body mass index (BMI) over 35. In some countries, such as China, surgery is being recommended in patients with a BMI as low as 28 – 30, since they are getting diabetes at lower BMIs. Also surgery has been shown to decrease the micro- and macrovascular damage brought on by diabetes, whereas traditional lifestyle and diets have not.

New interventions that do not require surgery are being tested as we speak. Some of these interventions use endoscopic methods to deploy barriers or to destroy the lining of the first part of the intestine. Others try to re-create the anatomy of existing operations such as the sleeve gastrectomy via the endoscope so there is no incision.

Q: Do you see those new types of medications you mentioned eventually replacing surgical treatments for obesity and diabetes eventually?
Dr. Higa: Not yet, but I am hopeful. All of our long-term studies looking 25 years out show how effective surgery is in treating diabetes. There are now eight randomized, controlled trials looking at aggressive medical care versus surgery in treating diabetes. And by aggressive medical care, we mean monthly visits with a health counsellor and insulin with other medications. Surgery is much more powerful.

The micro-vascular complications of diabetes like kidney failure and the macro-vascular complications like heart attacks and strokes are vastly improved by bariatric surgery. If you do this medically through life-style changes or medication it just doesn’t work as well. “The Look AHEAD (Action for Health in Diabetes) Trial” by National Institutes of Health, could not demonstrate a significant cardiovascular improvement even after 10 years of follow up. (The Look AHEAD study, which began in 2001, had 5,145 participants with average BMI of 36 and type 2 diabetes. The study assigned randomized diabetes education and support and lifestyle interventions to see if weight loss could reduce strokes, heart attacks and cardiovascular related deaths.)

Q: Do you think the American Medical Association’s classification of obesity as a disease will change how bariatric and metabolic surgery is viewed?
Dr. Higa: We still don’t have the groundswell of public support for treating obesity like a disease. Many still see obesity as a result of lifestyle choices. And yet, when I looked at the literature 25 years ago it was clear that obesity was not a conscious choice, but a disease governed by many factors outside our control, such as genetics.

There is a definite genetic predisposition to obesity, but also our environment has changed so drastically. We manufacture food differently and there’s more availability. Vegetables today are designed for maximal sugar content and disease resistance. I worked for USDA while I was in college and that’s what we were doing back then with plant breeding. There’s also more stress and chemicals in our environment and it’s affecting our microbiome (the trillions of bacteria, fungi and viruses that live in and on the human body which are thought to play a critical role in digestion, appetite control, regulation of the immune system, disease prevention, wound healing, brain development, and even emotions.) Recent studies out of Harvard are showing that just a 20% upset in our microbiome can throw the whole body off and that contributes to our cravings and how we’re metabolizing our food.

I’ve been trying to figure out the psychology of primary care physicians who don’t address weight first rather than treating the symptoms of obesity – sleep apnea, diabetes, and hypertension. And why don’t primary care physicians refer patients earlier for surgery when they do have obesity and these symptoms? A focus group study showed they thought bariatric surgery was too risky, too dangerous and too complex. Insurance companies have a similar mindset.

Both bariatric surgery and aggressive medical treatment for obesity are not accessible to the vast majority of people. Most insurance won’t pay for the aggressive nutritional counselling and exercise and the preventative efforts it would take, and they require extensive weight loss attempts before approving bariatric surgery, but they will pay for the third coronary bypass surgery or expensive hypertension medications.

Q: Besides working to change attitudes toward obesity and aggressive treatments, what else would help?
Dr. Higa: Guidelines for deciding who is an appropriate candidate for bariatric surgery need to be updated. Approvals by insurance companies for surgery has been based not on medical need, but on BMI (Body Mass Index), and they’re using guidelines developed in 1991.

New research shows, especially in the Asian population, that diabetes comes on with a much smaller BMI. In China the average Type 2 diabetic has a BMI 27, but the National Institutes of Health guidelines say only those with a 35 or greater BMI should be candidates for bariatric surgery. It’s a policy that’s prejudiced racially against Asians and Hispanics. Hispanics also get diabetes at lower BMIs and have more severe diabetes symptoms, especially when they have native-American genetics as well.

My personal belief is that access to health care and disease prevention is a right, not a privilege. Reviewing the medical literature over 25 years ago was enough to convince me that the treatment of obesity and diabetes needs to be based on science, not ancient misconceptions and prejudice. If you think that racism is a problem today, compare this to society’s disregard for the millions of individuals denied treatment based on their weight. It is time to rise above the rhetoric and act accordingly.